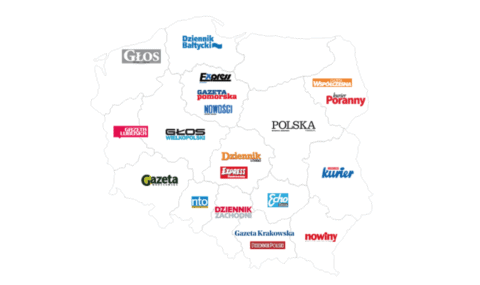 As outlined in the recent International Press Institute report issued as part of the Media Freedom Rapid Response coalition, of which ARTICLE 19 is a member, media freedom in Poland is under growing pressure from the authorities. In December 2020 it was announced that Polska Press publishing house owned by the German company Verlagsgruppe Passau would be bought by PKN Orlen, the state-controlled oil company. Polska Press group owns the majority of local newspapers, as well as over 100 weeklies and 500 websites, having access to 17 million readers in Poland. The takeover by a state affiliate of such a large proportion of  independent media would  therefore be a very serious blow to the state of media freedom in the country.

In February 2021, the President of the Office for Competition and Consumer Protection (UOKiK) issued a decision allowing PKN Orlen to make the transaction. The independence of the competition body has been questioned in the past, with its President being close to the prime minister Mateusz Morawiecki. As an example, in January 2021 the same body did not allow independent publishing house AGORA SA to buy Euroradio, which owned one of the most popular radio stations in Poland, Radio Zet.

In March 2021, Adam Bodnar, the Polish Ombudsman, appealed to court against the decision of the President of the Office of Competition and Consumer Protection of 5 February 2021 to approve a concentration involving the acquisition of control over Polska Press by PKN Orlen. In its decision from 8 April 2021, the Regional Court in Warsaw agreed with the Ombudsman and issued an interim injunction suspending the acquisition of Polska Press. It aims to stop the transaction as long as the Regional Court reviews the Ombudsman’s appeal against the concentration decision of the Competition Authority. The decision is final and cannot be appealed.

The decision was made thanks to the complaint of the Ombudsman Adam Bodnar, whose term ended last year. The Senate, where the opposition has the majority, blocked the election of the Law and Justice candidate for the post, therefore the authorities have requested the politicised Constitutional Court to rule whether Bodnar can stay as an acting Ombudsman. The  ruling should be announced on 15 April andit is expected that Mr Bodnar will not be allowed to continue his work.

This example shows how important it is to have independent institutions as safeguards against attacks on fundamental freedoms said Sarah Clarke, Head of Europe and Central Asia at ARTICLE 19. In recent years, the ruling Law and Justice party has been actively dismantling the rule of law and persecuting independent judges. The EU has been too slow in responding to these events. This decision proves that there are still independent institutions in Poland and we need to ensure that the authorities do not take further steps in dismantling what independent institutions remain. We thank Mr Adam Bodnar for  fighting – in the face of tremendous political pressure – for media freedom in Poland by appealing the decision of the competition authority.

ARTICLE 19 will continue to monitor the situation as it develops.