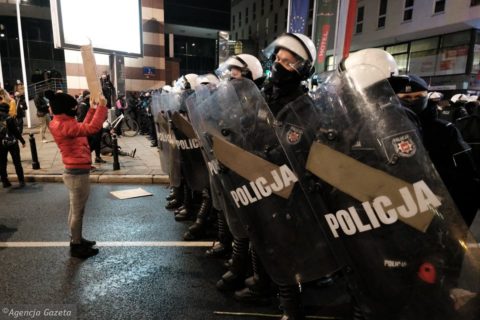 ARTICLE 19 strongly condemns the ongoing crackdown on protests against the abortion ban in Poland, and police brutality against protesters and journalists. We call for the immediate cessation of persecution and violence against those exercising their right to protest and to report on protest related issues.  The protests concern a matter of crucial public interest for women’s reproductive rights, and participation in public life, and the right to protest on this issue must be protected.

For more than a month, hundreds of thousands of people have gathered and protested across the country against the decision of the Constitutional Court to ban abortions in cases of foetal abnormality. The Constitutional Court has been criticised for its lack of independence in recent years. The protests, led by women and organised by the Women’s Strike initiative, have reached an unprecedented scale including in small towns and communities.

Since the beginning of the protests, ARTICLE 19 has been concerned about a number of violations of the right to protest in Poland:

The Polish authorities claim that the use of force against protesters is necessary for the purposes of fighting COVID-19 and is in response to protesters breaking the temporary movement restrictions. Prosecutor General and Minister of Justice Zbigniew Ziobro announced that activists will be prosecuted  for organising and instigating ‘illegal gatherings’ “on the basis of  causing danger to the health and life of people by spreading the virus”. He also ordered the Regional Prosecutor’s Office in Warsaw to initiate criminal proceedings against all persons who made public the names and faces of the police officers that practiced brutal and violent tactics against protesters and journalists.

The criminalisation of protesters and those monitoring and reporting on protests  in Poland is aggravated by two factors, on one hand, the lack of legal certainty on the imposition of COVID-19 restrictions related to public gatherings, and by  an ongoing campaign to undermine the independence of the judiciary.

ARTICLE 19 urgently calls on Polish authorities to protect protesters, journalists and protest monitors, and respect and guarantee the right to protest in compliance with their international and regional human rights obligations, including during a health emergency. The right to monitor protests is of utmost importance and does not cease if a protest is dispersed or declared unlawful, and it applies to independent reporters and citizen journalists as well as traditional journalists and media workers. Mandatory identification of journalists’ in the context of protests goes against international human rights standards, and journalists as well as citizen journalists have a right to report on abuses by police in the context of protests.

We call on the Deputy Prime Minister for Security and head of the ruling Law and Justice party Jarosław Kaczyński, Prosecutor General and Minister of Justice Zbigniew Ziobro, as well as the Minister of Interior and Administration Mariusz Kamiński to:

This statement by ARTICLE 19 is part of the Media Freedom Rapid Response (MFRR), a Europe-wide mechanism which tracks, monitors and responds to violations of press and media freedom in EU Member States and Candidate Countries.