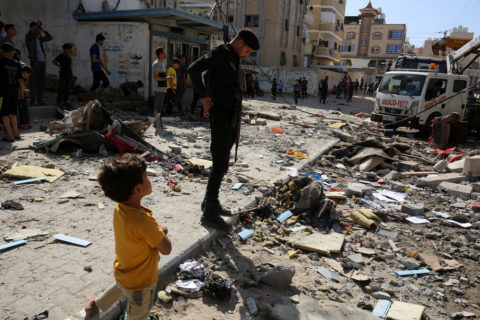 Palestinians inspect the damage caused by an Israeli air strike in the town of Khan Yunis, in the southern Gaza Strip, on 12 May, 2021. Photo by Abed Rahim Khatib/Shutterstock

ARTICLE 19 joins the international community in calling for a ceasefire to end the terrible bloodshed and destruction suffered by civilians, particularly those in Gaza at the hands of the Israeli security forces.

We condemn the violence and the assault on all civilians.  Attacks  by Israeli forces against innocent civilians, many of them children, is a shocking violation of human rights and may amount to war crime. There should be no impunity for human rights violations and the Israeli authorities must be held accountable for those they have committed. That includes the continued targeted air strikes on media headquarters by the Israeli forces.

We have seen the situation escalate as the protests continued, as have Israel’s mounting violations of international law and abuses against Palestinians’ rights to protest, freedom of expression, media freedom and access to information.

“These vital freedoms are essential and must be protected for the achievement of a lasting peace. We call on Israel to cease its disproportionate response that further denies the fundamental rights of Palestinians,” said Quinn McKew, Executive Director for ARTICLE 19.

Ongoing protests are a crucial means for Palestinians to demand equal treatment and protect against the unlawful, forcible evictions taking place in the neighbourhood of Sheikh Jarrah, East Jerusalem. Reports point to the use of live ammunition rounds fired against crowds of protesters, with  hundreds of recorded casualties.

The current escalation of the conflict was ignited by the use of violence by Israeli police during operations to suppress Palestinian protests against illegal evictions, and following years of documented repression and a denial of basic rights by the Israeli government.

ARTICLE 19 will publish a statement detailing our concerns on human rights and freedom of expression violations taking place in Palestine and Israel.