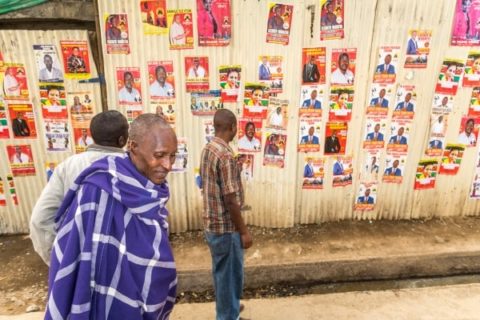 On November 3, 2015, Joseph Nkaissery, Kenya’s cabinet secretary for interior and national coordination, appeared before the Parliamentary Accounts Committee to answer questions about millions of dollars his ministry allegedly paid irregularly to suppliers, the bulk on the last day of the budget year.

Journalists from several Kenyan media outlets attended the session and published articles the following day. The fallout was swift. Nkaissery warned journalists who reported the proceedings they faced arrest if they failed to disclose their sources, and that leaking such information to the media could jeopardize national security. The minister either forgot or seemed to ignore the fact that the committee’s sessions were open, and journalists were present when members of parliament questioned him.

Soon after Nkaissery’s warning, police from the Directorate of Criminal Investigations (DCI) attempted to summon journalists who wrote the stories for interrogation regarding their sources, but they did not comply. Days later, the police bundled the Daily Nation’s John Ngirachu, who was among those summoned, into an unmarked vehicle, and drove him to the DCI headquarters in Nairobi for interrogation. The police denied him access to a lawyer, but released him without charge after four hours.

The state-orchestrated intimidation of journalists after Nkaissery’s committee session is symptomatic of risks and challenges they have faced under President Uhuru Kenyatta, who took office in April 2013, and is seeking reelection in general elections scheduled for August 8, 2017. As the election nears, Kenyan government officials are increasingly scrutinizing media reporting and the impact it has on public perceptions of governance, health and education services, security, land rights, state management of public funds and the ongoing lack of accountability for the 2007 post-elections violence.

An independent media is crucial for Kenya’s ability to hold free and fair elections. But rather than protecting free expression and media rights – guaranteed by Kenya’s Constitution and international human rights law – Kenyan officials have responded to critical press coverage with harassment, threats, criminal charges, withholding of advertising revenue and even violence against journalists and media outlets.

Based on four months of research and interviews with journalists, editors, bloggers, human rights activists, and government officials throughout Kenya by Human Rights Watch and ARTICLE 19 Eastern Africa (“ARTICLE 19”) – the regional office that monitors and documents violations of freedom of expression – this report documents abuses by government officials and agents and other actors against journalists and bloggers in the run-up to the 2017 general election. It highlights the government’s failure to fulfill its constitutional and international human rights obligations to protect freedom of expression and media freedoms.

Human Rights Watch and ARTICLE 19 research found that local and international journalists and media outlets in Kenya have come under pressure since Kenyatta assumed office in 2013. The government has attempted to obstruct critical journalists with legal, administrative, and informal measures, including threats, intimidation, harassment, online and phone surveillance, and in some cases, physical assaults.

Despite receiving formal complaints from journalists, police have rarely investigated the attacks or threats. There is no evidence that any state actor has in the past five years been held accountable for threatening, intimidating, or physically attacking a journalist or blogger in Kenya.

Police have themselves been implicated in online surveillance and, at times, in directly threatening and physically attacking journalists. In some cases, police have arbitrarily arrested, intimidated, or harassed journalists, such as John Ngirachu. In 2015, Kenyan authorities threatened to ban two foreign journalists working for an international media outlet for reporting on alleged police death squads implicated in extrajudicial killings.

Senior editors of media outlets critical of the government say that authorities have called for specific journalists to be sacked. In some instances, the authorities have withdrawn or withheld advertising revenue, demanding apologies for specific editorial content, or asked to tone down coverage of a range of politically sensitive topics, including land, corruption and security issues.

The International Covenant on Civil and Political Rights, to which Kenya is a party, provides for the right to hold opinions without interference and the right to free expression. The government harassment and intimidation of independent reporting, and lack of police investigations into such abuses, threaten to undermine Kenya’s 2017 elections. For free, fair, and credible elections to take place, the government should protect freedom of expression and work to ensure that no government or security official seeks to silence journalists or arbitrarily obstruct their access to information.

The government should respect and uphold its obligations under international human rights law, and voters’ right to receive and obtain information at this critical time.