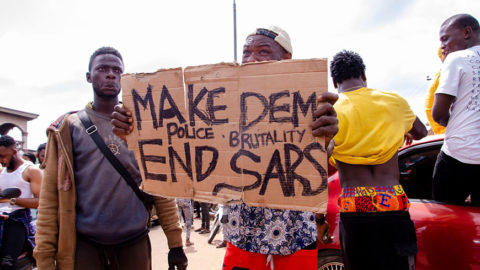 “ARTICLE 19 strongly condemns the unlawful killings of peaceful protesters by Nigerian soldiers. As we are waiting to hear from the authorities why this happened, and exactly how many people were killed and wounded, I am urging the Nigerian government to end the use of force against peaceful protesters, prosecute those suspected to be responsible for the killings immediately and to take more steps in fundamentally reforming the security forces.”

The protesters had gathered at Lekki Tollgate since the beginning of the protests and stayed despite the announcement of a curfew by the Governor of Lagos on 20 October. According to media reports, the CCTV cameras were taken away in the afternoon and just before soldiers arrived, the lights at the Lekki Tollgate were turned off. ARTICLE 19 reviewed many videos showing how soldiers shot at the protesters, killing at least 12 and injuring hundreds of people.

“Security forces can only use firearms when strictly necessary to protect life. That was absolutely not the case at Lekki Tollgate as the protesters had gathered peacefully and were no threat at all.”

“It is crucial that President Buhari now clarifies to the security forces that they can no longer get away with murder, and that they will have to face the consequences of their acts,” said Fatou Jagne Senghore.

An activist and witness of the Lekki Tollgate protests, who has protested since 8 October, condemned vehemently the use of lethal force to disperse the protesters. He said:

“The Nigerian Government declared war on unarmed peaceful protesters by sending the Nigeria troops after them. First, they removed all the CCTV cameras, then they switched off all the street lights, trapped the protesters in the middle and finally, they started firing sporadically. It is really sad and worrying to see that those who are supposed to protect us are shooting at us. We have the right to protest and given the scale of the protests over the last few days, you can see that the people are fed up with bad governance and police violence. The fight continues, and we will not stop until our demands are met.” 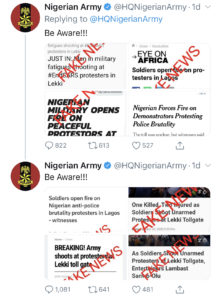 Shockingly, the army denied the killings. Following different new reports on the killings, the Nigeria army through their Twitter account posted screenshots of these reports and tagged them “FAKE NEWS”.

The Governor of Lagos initially denied that people had died and denounced the excesses of protestors accusing them to harass the citizens daily lives. He later promised investigation.

ARTICLE 19 welcomes the decision of the Lagos State government to order an investigation into the Lekki Tollgate shooting and urges the authorities to make public the findings.

Killings condemned by the international community

“It seems quite clear that Nigerian forces used excessive force, firing and killing with live ammunition”, adding that “If reports of the decommissioning of the lights and surveillance cameras prior to the shooting were to be confirmed, this could suggest that this attack on peaceful protesters was premeditated, planned and coordinated”.

The Economic Community of West Africa States (ECOWAS) also called on the Nigerian government “to start a dialogue without delay in order to find a peaceful solution quickly”. The African Union (AU) encouraged Nigeria to “conduct an investigation to ensure the perpetrators of acts of violence are held to account”.

The European Union (EU) and the United Nations (UN) have condemned the violent escalation with the Secretary of the UN calling for “an end to reported police brutality and abuses” and the EU said it is “crucial that those responsible of abuses be brought to justice and held accountable”.

The Prosecutor of the International Criminal Court (ICC) also called for “calm and restraint”.

The African Commission on Human and Peoples’ Rights had earlier also expressed its serious concern about reports of excessive use of force by police.

Widespread protests against violations by the police

Over the last two weeks, thousands of young people across the country have protested against police killings, corruption and insecurity. The protests initially focused on the Special Anti-Robbery Squad (SARS), a unit of the Nigeria police tasked with fighting violent crimes such as robbery and kidnapping. SARS has for years been accused of unlawful killings, torture and ill-treatment. The protest attracted international attention with the hashtags #EndSARS rising from social media platforms.

In response, police officers have resorted to excessive use of force, tear gas, arrest and killings of protesters. Since the beginning of the protests, at least  56 people were killed while others are wounded by security forces and some arrested. There have also been counter-protests and violent groups attacking the peaceful protesters. Violent groups have also attacked media offices, prisons and police stations in different states as a result of security forces repression and increasing escalation.

A witness quoted by a local newspaper confirmed: “I have personally seen seven corpses […]. Soldiers are in the area to douse the tension and some of the corpses were evacuated by them, while some other corpses were taken away by the families of the victims.”

The nationwide protest pressured the authorities to dissolve the Special Anti-Robbery Squad (SARS) with immediate effect.  The police announced that they created a new police unit to replace the SARS unit, which was highly criticized by protesters.

Nevertheless, the protesters continued their demands for a full reform of the police and an end to insecurity in the country.  The police responded with force, and several arrests and ill-treatment have been recorded.

On 18 October, the Senate President has also called for an end to the protest to give the authorities time to implement the demands of the protesters. Several states have imposed a 24 curfew including Lagos, Edo and Imo states to counter-protest and avoid additional fatalities. 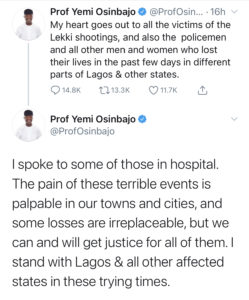 President Buhari, who kept silent all these days, finally appealed for “understanding and calm”, reminding his determination to run police reforms without mentioning the killing of Lekki. However, in a twitter message to the victims of Lekki Toll Gate shooting,  Vice President Osinbajo expressed his sympathy and declared: “…we will get justice for all of them”.

The right to peacefully assemble is guaranteed by the Nigerian constitution and the international human rights treaties it signed. Nigeria has the obligations to protect the right to life, as guaranteed by the constitution, African Charter on Human and Peoples’ Rights, the Universal Declaration of Human Rights, and the International Covenant on Civil and Political Rights.

“There have been allegations that the security forces use excessive force against protesters for many years. Time and again, the Nigerian authorities have claimed to investigate these incidents, but the reports are never made public. We are urging the authorities to break with the past and immediately release all reports about human rights violations by the security forces, including the most recent report presented to the President in 2019 by the National Human Rights Commission on SARS,” said Fatou Jagne Senghore.

For more than ten years, national and international human rights organizations have documented extrajudicial executions, torture and ill-treatment by the Nigeria Police Force. In June 2020, Amnesty International published a report on the Special Anti-Robbery Squad. The report revealed a pattern of abuse of power by SARS officers and the consistent failure by the Nigerian authorities to bring perpetrators to justice. It highlighted the deficiencies in Nigerian police accountability that contribute to, and exacerbate, these violations.

ARTICLE 19 and three Nigerian organisations (AFRICMIL, RULAAC, HEDA Resource Center) recently warned on the deterioration of civic space in Nigeria denouncing unlawful killings and ill-treatment of protesters and harassment of journalists committed by security forces. The organisations called on the Nigerian authorities to prosecute the perpetrators and to guarantee fundamental freedoms, including freedom of expression and right to protest. This appeal and the precedent have not been acted upon by the authorities.

With the military involved in security operations in 35 out of Nigeria’s 36 states, law enforcement operations have become totally militarised.

In September 2019, the UN Special Rapporteur on extrajudicial, summary and arbitrary executions, Agnes Callamard conducted a visit in Nigeria. She concluded in her summary report:

“The warning signs are flashing bright red: increased numbers of attacks and killings over the last five years with a few notable exceptions; increased criminality and spreading insecurity; widespread failure by  the federal authorities to investigate and hold perpetrators to account, even for mass killings; a lack of public trust and confidence in the judicial institutions and State institutions more generally; high levels of resentment and grievances within and between communities; toxic ethno-religious narratives and “extremist” ideologies – characterised by dehumanization of the “others” and denial of the legitimacy of the others’ claims; a generalised break down of the rule of law, with particularly acute consequences for the most vulnerable and impoverished populations of Nigeria.”

ARTICLE 19 calls on the Nigerian authorities to conduct independent investigations with a view to bring all suspected perpetrators of these killings to justice. The police should further ensure that everyone can enjoy their right to protest and protect the protesters from attacks. Also, the authorities should release all persons arrested solely for expressing their opinion. Any police reform must be based on the protection of human rights and aim to end impunity.

ARTICLE 19 calls on the UN and African Commission Special Rapporteurs of Freedom of Expression, Freedom of Assembly, on Conditions of detention and policing and on Extra judicial killings to urge Nigeria to end police killings and ill-treatment of protestors and impunity, and to comply with their international human rights obligations in light with their respective mandates.