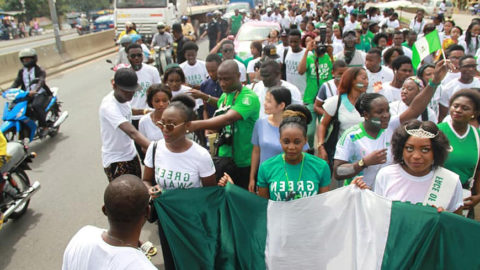 ARTICLE 19, African Centre for Media and Information Literacy (AFRICMIL), Rule of Law and Accountability Advocacy Centre (RULAAC) and Human and Environmental Development Agenda (HEDA Resource Centre) today urged the Nigerian authorities to commit to freedom of expression and assembly and end the arrests of people for expressing their opinions.

Nigeria should immediately release anyone who is detained solely for exercising their right to free speech and amend any laws that are not in line with Nigeria’s international human rights obligations.

“Protest is a right. The Nigerian Constitution clearly recognises the rights to freedom of expression and assembly. Nigerian security forces cannot simply arrest anyone who expresses an opinion critical of the government. Yet, in the past week, we have witnessed mass arrests of protesters,” said Fatou Senghore, Director of ARTICLE19 Senegal and West Africa.

On 5 August, dozens of people were arrested in Abuja, Lagos, Abeokuta, Kano, Calabar and Osogbo during the #RevolutionNow protests calling for good governance. The police used teargas to disperse the largely peaceful protests. Most people were released the following day, without charge. Despite their release, the Nigerian authorities did not shed light on the excessive use of force against the protesters and the allegations of degrading treatments to which some demonstrators were allegedly subjected. In addition, the activist named Usman Zush remained in detention  about 7 days without being judged. The police were accusing him of impersonation alleging that he was found with two ID cards. But a local lawyer who was closer to the case told anonymously ro A19 that Usman was solely arrested in connexion with the Revolution Now protest and impersonation was to cover up.

Three days later, on 8 August, protesters were arrested in southern Kaduna state during protests against the increased insecurity in the state.

“Repression of protests and Impunity should stop. The perpetrators of the alleged inhuman violations should be identified and punished. It’s the responsibility of the Nigerian Government to investigate and enforce  justice,” said Olanrewaju Suraju, the Chairman of HEDA.

In the context of this deteriorating civic space, ARTICLE 19, AFRICMIL, RULAAC and HEDA are also overly concerned about recent arrests and judicial decisions for blasphemy.

On August 10, 2020, the singer Sharif was sentenced to death for blasphemy by a Sharia Court in Kano State. He was accused of blasphemy against the Prophet Muhammad in a song he distributed through WhatsApp in March 2020.

In another case, on 28 April, the President of the Nigerian Humanist Association was arrested in Kaduna for insulting the Prophet Muhammad on his Facebook page a day earlier. He is reportedly yet to be charged and detained incommunicado in Kano State. He may risk a death sentence like Sharif.

“It is shocking that posting a song on WhatsApp is punished with death, even if it is considered insulting. Nigerian authorities should protect opinions online and offline in consonance with its international human rights obligations. Death sentence cannot be accomplished without violating the right to life guaranteed to all Nigerians. It should have never been decided. Death penalty must be abolished unconditionally,” added Okechukwu Nwaguma, the Executive Director of RULAAC.

“We urge the Nigerian authorities to release all people who are currently detained across the country solely for expressing their opinions. In addition, Nigeria should ensure its laws enable a climate of free speech,” insisted Chido Onuma, the chairman of AFRICMIL.

Legal framework on freedom of expression and assembly

Laws which seek to prevent discussion and debate on religion, such as laws on blasphemy, religious insult and defamation of religion, are fundamentally incompatible with international human rights laws and standards. They violate several legally binding provisions on freedom of opinion and expression, freedom of thought, conscience and religion, equality, and freedom from discrimination. Nigeria should repeal these laws to comply with the international human rights obligations.

Although the right to freedom of expression under international law is not absolute, restrictions are permitted only in certain narrowly defined circumstances and must be provided in law, serve a legitimate purpose and be necessary for that purpose.

Human right treaties protect the rights of individual persons and, in some instances, of groups and persons, but not abstract entities such as values, religions, beliefs, ideas or symbols.  These treaties do not allow restrictions to be placed on the exercise of the right to freedom of expression for the purposes of ensuring respect for “dogmas or worship of any lawfully existing religious community” or protecting them from ridicule or abuse.

The Human Rights Committee, in its General Comment No. 34 in 2011, stated that: “[P]rohibitions of displays of lack of respect for a religion or other belief system, including blasphemy laws, are incompatible with the Covenant, except in the specific circumstances envisaged in article 20, paragraph 2, of the Covenant.”

The UN Special Rapporteurs on freedom of opinion and expression, freedom of religion or belief and racism, racial discrimination, xenophobia and related intolerance have repeatedly condemned laws prohibiting “defamation of religions” and/or blasphemy because they are relied upon to persecute religious minorities and dissenters.

For example, the UN Special Rapporteur on the promotion and protection of the right to freedom of expression and opinion has stated that limitations on the right to freedom of expression were “designed in order to protect individuals against direct violations of their rights” and “are not designed to protect belief systems from external or internal criticism.”

The Guidelines on Freedom of Association and Assembly in Africa underline that protest is a right. The African Commission’s Guidelines for policing assemblies by law enforcement agencies in Africa set out the principles that security forces should follow during demonstrations. They define the primary role of law enforcement during demonstrations “to ensure public safety and to safeguard the human rights of all persons.”

The dispersal of a protest should be used only as a last resort and in exceptional circumstances; force should never be used to disperse a peaceful protest. The police should give priority to dialogue and avoid the use of force, even if the demonstration is considered illegal. Arrest or detention is arbitrary if it is in response to the exercise of the rights to freedom of expression, association, and peaceful assembly.

During the last UN UPR session in 2018, Nigeria stressed it was one of the “ friendliest destinations for the press and all organizations committed to the truth and impartiality.” It supported the recommendations to protect and promote freedom of expression, association and peaceful assembly “to create a safe and favourable environment for human rights defenders, journalists and civil society”. But Nigeria noted the recommendations to abolish death penalty and death sentences continue to be handed down. Since 2010, Nigeria has abstained from voting on UN General Assembly resolutions on the use of the death penalty.

There are currently more than 2700 people on death row in Nigeria.

We ask the Nigerian government to: