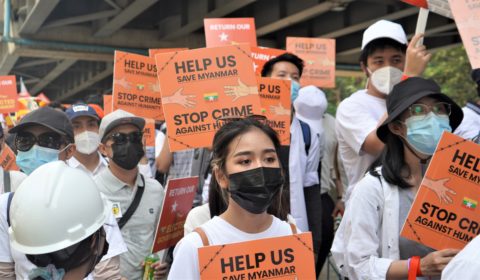 ARTICLE 19 made this statement during the written update of the UN High Commissioner for Human Rights on Myanmar at the 48th Session of the Human Rights Council.

We thank the High Commissioner for her written update on the investigation into the coup and its aftermath in Myanmar. Since 1 February, the military has killed at least 1,000 individuals, arrested, detained, or sentenced over 5,800 individuals, and continues to ramp up repression in the country.

We welcome the focus of the written update on the range of repressive laws the military has introduced since the coup that critically curtail human rights and allow for the arbitrary arrest, detention, and surveillance of those expressing criticism of the regime.

The military regime has amended the Penal Code and Criminal Code of Procedure to introduce overbroad and vague restrictions on the right to freedom of expression, including provisions criminalising the spread of so-called ‘false’ information as well as defamatory comments against military officials.

The military authorities reinstated the Ward and Village Tract Administration Law to require all households to register overnight guests with the local authorities. This creates a system of local surveillance in which the actions, activities, and movements of ordinary people are continually monitored and recorded, with far-reaching effects on freedom of expression, association, and assembly. The impact of this law on civil society is particularly chilling and makes the situation for those fleeing arrest—and those who try to help them—even more precarious.

The military regime has repeatedly blocked internet access nationwide and in specific geographic areas, reportedly under section 77 of the Telecommunications Law, denying the free flow of information and concealing crimes under international law. ARTICLE 19 remains concerned about reports that the military is implementing increasingly powerful mobile surveillance technology, impeding the right to privacy.

We request the High Commissioner to further assess the impact of all legislation introduced on the right to freedom of expression in her ongoing investigation into the coup and its aftermath and to explicitly recommend the military authorities repeal such laws.