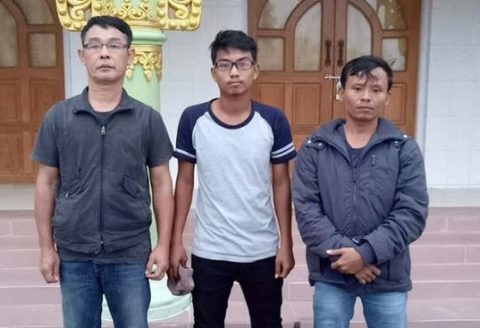 ARTICLE 19 calls for the immediate release and dropping of all charges against three journalists detained by the Myanmar military while reporting on the illegal drug trade in conflict-affected areas of northern Shan State, Myanmar, on 26 June 2017. Journalists Lawi Weng of The Irrawaddy, and Aye Naing and Pyae Bone Naing of Democratic Voice of Burma (DVB), were detained alongside four others while returning from carrying out their work in a Ta’ang National Liberation Army (TNLA)-controlled area of Shan State, and were held incommunicado before being transferred to police custody on 28 June.

The charges come amid worsening armed conflict between the Myanmar military (Tatmadaw) and ethnic armed groups in Shan State, where the military has been accused of a series of recent human rights violations.

The journalists face charges under Section 17(1) of the colonial-era Unlawful Associations Act, which penalises anyone who is a member of or “in any way assists the operations of” an “unlawful association” with a prison sentence of up to three years. The TNLA is considered such an “unlawful association”, and the law has been used to repress human rights defenders and journalists operating in conflict areas in the past.

The terms “assisting in any way” and “unlawful association” are very broad and lend themselves to arbitrary interpretation, paving the way for unnecessary and disproportionate restrictions on free expression.  The use of such legal provisions against journalists not only violates international law, but has a chilling effect on media in Myanmar.

Press freedom in Myanmar continues to be under threat under the democratically elected National League for Democracy (NLD) government, where the military still holds significant power. There have been numerous arrests and charges brought against journalists in recent months, often by members of the military, and access to various conflict areas in the country remains limited. The military has been known to detain and in some cases mistreat journalists in detention, and to date no one has been held accountable for the death of journalist Par Gyi in military custody in 2014, who had been reporting on armed conflict between the Myanmar military and another ethnic armed group.

The detention and charge of the journalists under the Unlawful Associations Act while they were carrying out their work is a violation of their right to freedom of expression, and represents another worrying attack on press freedom by Myanmar’s military. The right to freedom of expression, as set out under Article 19 of the UDHR and of the ICCPR, the latter of which Myanmar has yet to ratify, guarantees the rights of journalists to carry out their work without interference by the state, and includes their right to access and report on conflict areas, and areas where human rights violations have been reported.

Myanmar’s 2014 Media Law sets out under Section 7 that journalists reporting in conflict should be exempt from detention by security authorities, however, as noted in ARTICLE 19’s legal analysis, the scope of protection is unclear, allowing for arbitrary and inconsistent interpretation, which severely limits the protection it offers journalists in conflict areas.

“These latest charges demonstrate the severity of the threat to press freedom in Myanmar, where abusive laws continue to be used by the military and others to silence critical voices. Journalists must be allowed to carry out their work without fear of arrest or reprisal, in order to ensure the public are able to access information about events in the country, including in areas of armed conflict. The NLD government must take action to secure press freedom, and prioritise reforming and repealing laws such as the Unlawful Associations act which are used to target journalists” said David Diaz Jogeix, Director of Programmes at ARTICLE 19.

Lawi Weng, Aye Naing and Pyae Bone Naing must be immediately released and all charges against them under the Unlawful Associations Act, which violate their right to free expression, should be dropped. The Myanmar government must also take immediate steps to prevent any deterioration of press freedom in Myanmar by reforming laws including the News Media Law, and repealing the Unlawful Associations Act. The government should prioritise ratifying the ICCPR as part of ensuring the country’s laws are in line with international human rights standards.