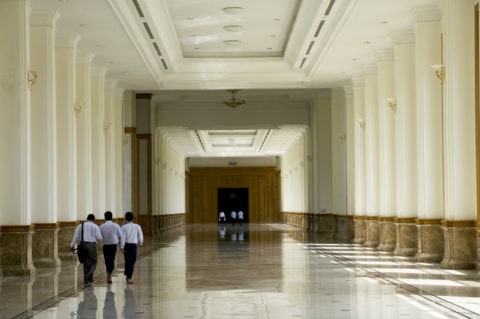 The main corridor in the Photo: Pyidaungsu Hluttaw or Assembly of the Union (Burmese parliament). Nic Dunlop / Panos

ARTICLE 19 finds that the recently proposed revisions to the Myanmar Telecommunications Law, which is regularly used against those expressing their views or reporting online, fail to address some of the fundamental problems of the law. The proposal published in the parliamentary gazette falls far short of the requirements of international standards, and is not enough to ensure the law protects freedom of expression in Myanmar. We urge the Myanmar government to take concrete steps toward improving the situation for freedom of expression in the country by abolishing Article 66(d) of the law in its entirety.

Article 66(d) has been used on numerous occasions since the NLD government took power in 2016, and has most recently been used to charge two journalists from the Voice Daily. The law provides for a prison term of up to three years for those convicted of the offence. In January 2017, the UN Special Rapporteur on the situation of human rights in Myanmar, Yanghee Lee, recorded over forty cases where the provision was used to punish individuals for Facebook posts that were critical of the government and military. She observed that most of these persons were prosecuted for “merely speaking their minds.”

Since State Counsellor Aung San Suu Kyi announced the planned revision to the law at a press conference on 6 July 2017, proposed amendments have been published in the parliamentary gazette. ARTICLE 19’s initial legal review of the amendments finds them to be insufficient, and that they would fail to address some of the fundamental problems with the law.

The proposals would maintain criminal sanctions for those “defaming” or “disturbing” any person using a telecommunications network. The term “disturbing” is worryingly vague, and can easily be interpreted in a broad and arbitrary fashion. Under international law, provisions that restrict freedom of expression must be clearly and narrowly defined. Equally, under international standards, all criminal defamation laws are considered a disproportionate restriction of freedom of expression.[1]

Many of those prosecuted under the law since its enactment, including activists and journalists, have been charged for expression that was considered defamatory. The proposed amendments, which retain criminal defamation as an offence, therefore clearly fail to address concerns by national and international civil society on its use to target critics, particularly by the military.

The proposed revision to Article 66(d) remains incompatible with international laws on freedom of expression, and ARTICLE 19 once again urges its abolition.

Proposed amendments to Article 80 also do not go far enough in addressing the problems in the law. We acknowledge that the proposed modifications to Article 80 to allow bail for those charged under 66(d) could marginally improve the situation of defendants and reduce lengthy pre-trial detention. However, the changes remain insufficient, as while bail may be granted in some cases, prison sentences of up to three years can still be handed down to those exercising their right to free speech.

In March 2017, the UN Human Rights Council adopted Resolution 34/22 on the situation of human rights in Myanmar, which specifically noted the increasing use of criminal defamation laws to target free expression online and offline in Myanmar. The resolution, which was adopted unanimously, highlighted Article 66(d) of the Telecommunications Law as one of several laws in urgent need of legislative reform. This responds to long-standing concerns raised by the UN Special Rapporteur on the human rights situation in Myanmar, and reflects the recommendations of her most recent report.

ARTICLE 19 also remains concerned that Myanmar has failed to ratify major international human rights treaties that protect the right to freedom of expression, including the ICCPR.

The failure of the current government to undertake necessary legislative reforms to fully protect the right to freedom of expression in the country, such as the repeal of Article 66(d), is a worrying signal of its lack of commitment to protecting this essential right.