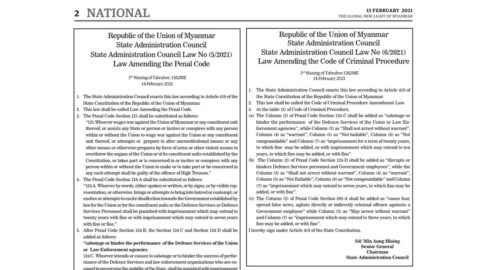 On 14 February, the Myanmar military announced the enactment of amendments to the Penal Code and Criminal Procedure Code that will severely curtail enjoyment of the right to freedom of expression. The amendments broaden the scope of the crimes of high treason and sedition and create new, vaguely worded offences relating to ‘sabotage’ or ‘disruption’ of military or government officials, causing ‘fear’, and knowingly spreading ‘fake news’.

“Having seized power in a coup, the military lacks democratic legitimacy and has no proper legislative authority. Nevertheless, it is proceeding to rapidly remake Myanmar’s legal code to the detriment of human rights.

“The amendment of Myanmar’s Penal Code and Criminal Procedure Code portends further repression. By creating these new offences and pushing a draconian cyber security law, the generals are laying the groundwork for long-term military rule and a sustained assault on freedom of expression.

“While Myanmar’s Penal Code has previously been used to suppress criticism of the military, the new crimes cement the military’s ability to arrest anyone at any time for virtually any kind of expression. The new criminal penalties are extremely severe and are clearly intended to intimidate the population into muted submission.”