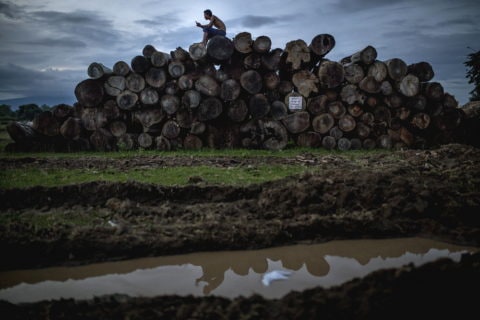 A man sits on a pile of logs which were confiscated by the Myanmar government together with the accused illegal loggers in Myitkyina in Kachin State. Over 10,000 seized timber logs were handed over to the inspection team of the Forestry Department in Myitkyina. The Chinese loggers left behind an excavator, three trailers, 436 trucks, four Pajeros, cranes and bicycles during the operation, along with six packets of opium, a large quantity of ephedrine, at the logging site.

ARTICLE 19 is extremely concerned about the death of Eleven Media journalist Soe Moe Tun, and urges the Myanmar authorities to conduct an independent, speedy, and effective investigation into his killing, including explicitly investigating whether he was killed for his reporting.

“Our condolences go to Soe Moe Tun’s family, friends and his colleagues at Eleven Media,” said Oliver Spencer, ARTICLE 19 Head of Asia. “Myanmar has significant levels of illegal logging and journalists like Soe Moe Tun are challenging the corruption that fuels it. The police need to explicitly investigate whether this is a crime against freedom of expression and seek to find both the perpetrators and the instigators of such a terrible wrongdoing.”

Soe Moe Tun, who had been reporting for Eleven Media about illegal logging in the country, was found dead on 13 December 2016 on the side of a road in Monywa, Sagaing region, Upper Myanmar. His body showed signs of beating.

According to the UN Food and Agriculture Organization, illegal logging is a significant problem in Myanmar, with poor governance, weak law enforcement and conflict hindering efforts to address the problem. Independent reporting on illegal logging is extremely important to expose these practices to the public and advocate for their elimination.

The killing of Soe Moe Tun also occurs in the growing climate of government pressure against media houses and journalists reporting on allegations of human rights violations, including by the Myanmar military. It also happens in the light of impunity for the murder of journalist Par Gyi, who was killed in 2014 in military detention.

ARTICLE 19 urges the Mynamar authorities to fully investigate the death of Soe Moe Tun, including whether he was killed due to his reporting on illegal logging. In particular, as highlighted in the 2011 Joint Declaration of four free expression mandates, they must ensure that :

ARTICLE 19 further calls on the Myanmar Government to adopt necessary reforms to create an enabling environment for freedom of expression, including through the media, and to ensure that the Myanmar media can report on complex political and other issues in the country without fear of violence and harassment.