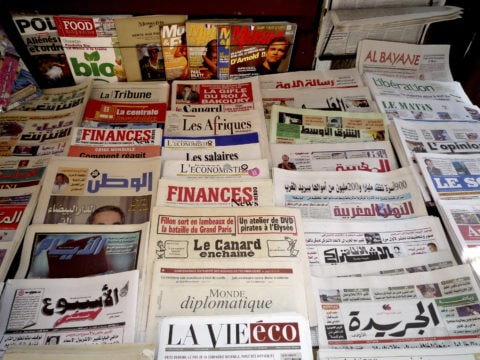 A kiosk selling newspapers and magazines along Boulevard Mohammed V in Casablanca.

Despite improvements, Parliament still must ensure that the draft law on access to information adequately protects the right to access information and freedom of expression.

“The current draft law on access to information has numerous failings and does not meet international standards on protecting the right to access information and the right to freedom of expression” stated Nejib Mokni, MENA RTI expert from ARTICLE 19.  Parliament should uphold those rights.

On 8 June, the Government sent a new version of Draft Law Number 31.13 (on access to information) to Parliament. The new draft, although an improvement from the version approved by the Government on 31 July 2014, still has numerous areas to address. The most problematic aspects of the latest version of the draft law are outlined below.

The most serious deficiency in the draft is the requirement of providing legal justifications, in Article 14. According to this article, those requesting information from a government body must explain why they need the information and justify how it affects their personal interests.

This seriously undermines the right to information and the purpose of the law itself, which is to provide more information to the public. Furthermore, Article 6 requires that information may only be used or re-used for a “legitimate purpose”, and that the content may not be “distorted”.

The phrases “legitimate purpose” and “distortion of content” are not clearly defined, which leaves the law open to abuse by officials who disagree with reports on their activities based on official documents obtained under the law.

The vague provisions in Article 6 are even more dangerous when read in conjunction with Article 29, which provides for criminal sanctions of up to three years in prison for the re-use of information in a way that “distorts” the contents of the information or harms the “public interest”. In addition, the current draft still allows for criminal sanctions relating to the disclosure of professional secrets.

“Criminal sanctions for those who are exercising their right to access information is in contradiction with international standards and will cause fear and confusion among the users of this law. It is likely that this will prevent many people from submitting requests for information” said Nejib Mokni.

Article 7 provides for absolute exemptions to the right to access information for anything relating to national defence, internal or external security and privacy. The exemptions are far too broad and undefined.

Furthermore, there is no public interest or harm test applied to the exemptions, in contradiction with international standards. For example, a public interest test should be applied in cases where the information relates to corruption, human rights or threats to public health.

Article 23 describes the appointment of the members of the commission, but fails to specify any professional requirements for the members. In addition, the commission does not include any civil society representatives, unlike the Human Rights Council and the Anti-Corruption Agency.

“The Moroccan Parliament should improve the new version of the draft law to reinforce the right to information, as enshrined in the Moroccan Constitution, and they should guarantee its implementation. They should do this by establishing a law in line with international standards, in order to ensure that all Moroccans enjoy the right to access information” stated Nejib Mokni.

ARTICLE 19 calls for the Moroccan Parliament to review the draft law to make it consistent with the Moroccan constitution and Morocco’s commitments under international law, which include the protection of the right to information and the right to free expression. Finally, Members of parliament should amend the law to clearly state that it would override other inconsistent laws.