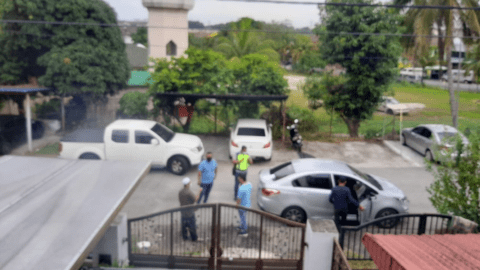 Yesterday, police visited the home or office of at least 15 individuals who participated in Saturday’s #Lawan rally in Kuala Lumpur. The #Lawan protesters, who faced police obstruction during their assembly, called for the resignation of Prime Minister Muhyiddin Yassin, a full Parliament sitting, and a moratorium on the repayment of all loans. Despite protesters fully cooperating with police investigating the rally, in recent days police have visited the homes of protest organisers and activists. Among those visited by police are SUARAM Executive Director Sevan Doraisamy, SUARAM Coordinators Muhammad Alshatri and Azura Nasron, Undi18 co-founder Qyira Yusri, and the Malaysia United Democratic Alliance co-founders Amir Abdul Hadi, Dr Thanussha Francis Xavier, and Dr Mathen Nair.

“The home visits are a blatant and petty attempt by the police to intimidate peaceful protesters and their families. There is no reason to go to protesters’ homes when they have already shown their willingness to cooperate with authorities in their ongoing investigations. In the context of the pandemic and Malaysia’s lockdown, is not only harassment but also an infringement on individuals’ sense of safety and security.”

“The police should stop wasting the protester’s time and their own resources. The home visits are pointless and arbitrary additions to an investigation that should never have been launched.”

“The arbitrary harassment of those who ask for good governance and accountability by authorities is a further stain on Malaysia’s human rights record. The government has a duty to facilitate, not obstruct non-violent gatherings.”