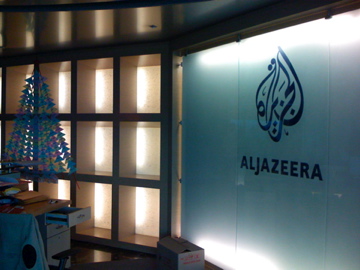 ARTICLE 19 condemns today’s police raid on Al Jazeera’s office in Malaysia, during which two computers were seized. The raids are part of an ongoing investigation into an Al Jazeera video report on the mistreatment of migrant workers and refugees during the COVID-19 pandemic. The video segment “Locked Up in Malaysia’s Lockdown” appeared on Al Jazeera’s weekly programme 101 East on 3 July.

“The authorities’ relentless pursuit of Al Jazeera seems to be driven by a desire to punish journalists who aired Malaysia’s dirty laundry rather than a good faith application of the law,” said Matthew Bugher, ARTICLE 19’s Head of Asia Programme. “The government should investigate the serious human rights violations shown in the film instead of targeting the filmmakers.”

On 6 July, the Malaysian police announced that they were investigating Al Jazeera for sedition, defamation and violations of the Communications and Multimedia Act. Four days later, police officers interrogated six Al Jazeera journalists who were involved in the production of the video.

On 19 July, the Malaysia National Film Development Corporation (FINAS) announced that a preliminary investigation into “Locked Up in Malaysia’s Lockdown” revealed that Al Jazeera had not obtained the necessary license to produce the video. According to the FINAS statement, Al Jazeera failed to comply with the licensing requirements in Section 22(1) of the Perbadanan Kemajuan Filem Nasional Malaysia Act 1981, which governs the film industry.

The police have also targeted at least one individual who appeared on the video. On 25 July, immigration officials arrested Mohamed Rayhan Kabir, a Bangladeshi migrant who was featured in the video. The Immigration Department announced that he will be deported.

After today’s raid, Al Jazeera condemned the police action, which is characterised as a “troubling escalation” of government attacks on media freedom in Malaysia.

“The raid of the Al Jazeera office is another blow to press freedom in Malaysia,” said Bugher. “The government must end its attacks on Al Jazeera and other independent media outlets in the country. Journalism is not a crime”.