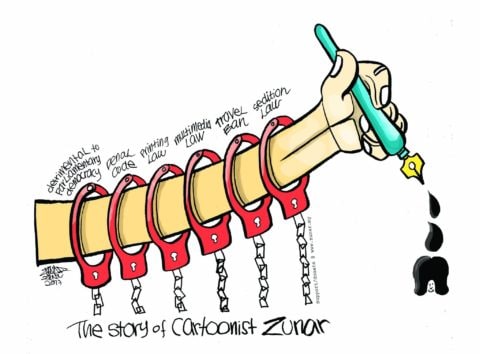 On 9 May 2018, Malaysians voted for a new era, ending the decades long rule of the previous government led by Prime Minister Najib Razak, which was marred by corruption scandals and repression of free speech. The vote marked a clear decision by the Malaysian people to no longer tolerate suppression of media freedom, online speech, and government criticism.

The Malaysian government has for many years used a raft of new and old legislation to silence critics and control narratives surrounding governance and corruption. The recently adopted Anti-Fake News Law creates a dangerously vague and broad tool to target social media users and journalists, while older provisions like the Sedition Act continue to be used to target dissent. LGBT and women activists have faced harassment and smear campaigns, while social media posts have often meant criminal charges. So is this a chance for change?

On 2 July we’ll be in conversation with activist and cartoonist Zunar (full name Zulkiflee Anwar Ul Haque), who has faced government censorship, criminal charges, and most recently a travel ban, purely for criticising the government, but continues to fight for the right to freedom of expression. Together with activists and researchers Nalini Elumalai and Shamini Darshni Kaliemuthu we’ll be discussing the barriers to human rights defenders, free expression and independent reporting in the country, as well as looking forward to explore the opportunities for reform in this new era.