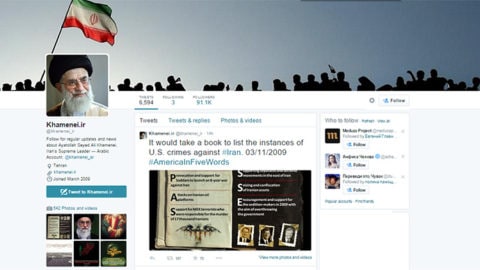 The last few weeks have seen major protests in the US in response to the deaths of African Americans at the hands of US police. In the time of social media activism, many movements, such as the current protests in the US, use differing online tools to get their message across. The #BlackLivesMatter hashtag has become instrumental to rally support and disperse information. Yet, it also became a prime opportunity for Iran’s social-media savvy officials to jump-on the hashtag bandwagon and twist the issue in their favour. And not just any official from Iran, but Ayatollah Khamenei himself. The Supreme Leader entered the violence and race debate by comparing the US’s treatment of its black citizens to the US involvement in Gaza in a series of tweets, hashtagging #BlackLivesMatter. Yet, these tweets by the Supreme Leader only make the sting of his own hypocrisy more painful for those suffering from the regimes oppressive methods, especially with the institutionalised repression in Iran that uses violence, force, brutality and a disregard for basic rights to reach its aims.

Khamenei was met with the heavy hand of twitter backlash, where many were keen to highlight the sanctimonious nature of his tweets. Many retaliated with hashtags such as #AllLivesMatter, #KurdishLivesMatter and #WomenLivesMatter. These all relate back to the numerous lives that have been affected by the government’s arbitrary and oppressive rule.

The example of Kurdish political prisoner, Alireza Rasouli, is telling of this.  Rasouli has now been on a hunger-strike for around 50 days — his protests commenced in response to being deprived medical treatment. Rasouli, despite his seriously declining health, is still denied the necessary medical treatment for cancer and osteoporosis, as well as malnutrition. His health has reached life-threatening stages.

Similarly, Behnam Ebrahimzadeh, a labour rights activist who has been on hunger-strike since 2 December 2014 is also facing critical health issues. To curtail his right to protest at his transfer to ordinary prisoners’ ward in Gohardasht, the officials have refused to give him warm clothing and heating instruments.

Further examples of Iran’s systematic repression of its own ethnic minorities in the recent days is the three-year suspended prison sentence of civil rights and environmental activist, Mohammad Sadiq Manguri. Manguri was arrested by security forces in November 2014 after he took part in a protest in support of a popular Kurdish singer, Hassan Zirak, who it is believed was defamed by an Iranian television station. Manguri, the secretary of the environmental preservation and conservation society in Mahabad, was sentenced without his lawyers present, in clear violation of international human rights law. A formal verdict is awaited.

On top of this, the judiciary in this tech-savvy regime has also decided to further block communication apps like Tango, LINE and Whatsapp in order to curtail ‘illegal content’. This is a clear move to remove communication tools that circumvent the state-controlled Telecommunication Company of Iran (TCI), which will make easier for the regime to clampdown on dissent.

These are among only a few recent examples that debunk the Supreme Leader’s attempts to hold a moral high-ground on international issues. As far as human rights and the treatment of citizens are concerned, Iran’s 2014 record has been shocking.

In an interview with Gissou Nia, Deputy Director of the International Campaign for Human Rights in Iran (ICHRI), she highlights the deteriorating state of human rights in Iran and especially the recommendations accepted by the Iranian officials in the last Universal Periodic Review (UPR) in November 2014. These recommendations cover issues such as Iran’s restrictions on freedom of expression and assembly; torture; lack of fair trial standards; due process of law; and discrimination against ethnic and religious minorities.

Will Ayatollah Khamenei refocus on these recommendation in the upcoming New Year? Or will he continue to use social media platforms — that are banned in Iran — to continue waging a tweet-war with the West?