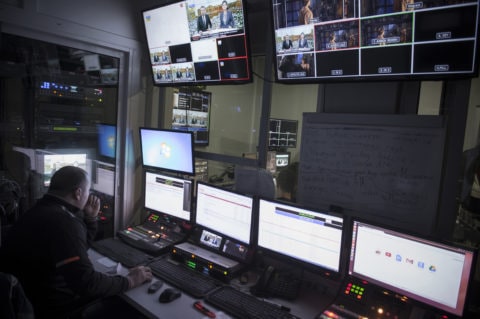 A man looks at a screen in the control room of the Crimean tatar TV Channel ATR. It is one of only a few Ukranian channels that have not been shut down by the authorities. Many local Tatars are guarding the channel to safeguard it from any interference. Tatars have lived in Crimea for centuries but in 1944 Stalin punished the entire tatar population for collaboration wth the German occupiers by deporting them to Uzbekistan and other parts of the former Soviet Union, despite the fact that many of them fought in the Red Army. The Tatars were only permitted to return to Crimea in the late 1980s at which point they were given land which nobody else wanted. Many Tatars fear that they will be second class citizens again if Crimea joins Russia.

In August 2015, ARTICLE 19 analysed Tajikistan’s Law on Television and Radio Broadcasting in the light of international standards on freedom of expression and information.

Given Tajikistan’s commitment to switch from analogue to digital TV and Radio broadcasting in 2015, it is important to assess the existing law on television and radio broadcasting in order to propose recommendations that can both improve existing legislation and ensure the success of the digital switchover in a democratic society.

ARTICLE 19 acknowledges that the Law has a number of positive features. In particular, it explicitly declares that its aim is to implement “freedom of expression and the rights of the citizens to receive full, reliable and operative information, to open and free discussion of social processes.” It also provides for some protection of the editorial independence of television and radio companies and also refers to the right to information.

Nonetheless, the Law fails to meet freedom of expression and information standards in a number of areas.

ARTICLE 19 believes that Tajikistan’s current preparations for the digital switchover of radio and television broadcasting present a good opportunity for updating legislation in this area. We therefore urge the Government of Tajikistan to consider our recommendations to bring the Law into conformity with the country’s international obligations. In particular, the creation of an independent regulatory authority would constitute a major step towards stronger protection of freedom of expression in Tajikistan. ARTICLE 19 believes that the creation of such an authority is a necessary condition for the success of the digital switchover.

We also urge the Government of Tajikistan to initiate open, transparent, and participatory consultation processes regarding all aspects of the digital switchover, including radio spectrum management, allocation of licenses, universal access, digital dividend, pluralism and media concentration, and the remit of public service media.