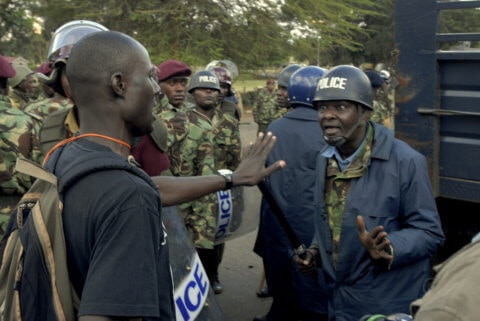 A local freelance photographer argues with a policeman after tear gas was fired towards a group of journalists and ODM supporters to try to prevent a rally organised by the opposition Orange Democratic Movement (ODM) in Uhuru park. The ODM were protesting against disputed election results which had kept them out of power.

From May 2017 – April 2018, ARTICLE 19 recorded 94 incidents of violations against individual journalists and media workers, including bloggers, in Kenya.

Media freedom in the country was clearly in decline in 2017. Political instability around disputed elections in August, which saw mass protests met by excessive use of force by police, was accompanied by dozens of violations against journalists and media workers trying to report on political issues and protest. Violations continued throughout the year, with journalists facing harassment and threats from a number of actors including public officials, media shutdowns, and online censorship.

Journalists who covered the 2017 general elections worked in an exceptionally challenging environment. Attacks against them showed a marked rise in severity and in numbers during prolonged elections period that saw journalists face physical attacks, arrest, being denied access to areas, and receiving various forms of threats, even more so after the August Elections and in the run up to the October repeat presidential poll.

Politics and elections, security and corruption were among the top dangerous stories to report on by journalists between the period monitored.

A total of 43 journalists were physically assaulted during the monitoring period, and one received death threats, while three TV stations were shutdown for covering content seen as undesirable by the government.

Cases of attacks on freedom of expression were documented in 15 of the country’s 47 counties. Supporters of various political factions were the main culprits followed by police, private individuals and unknown assailants.

This report highlights key examples of violations against journalists and media workers during the monitoring period, and sets out recommendations to the government, security forces, and politicians to take action to end this wave of attacks on the right to freedom of expression.