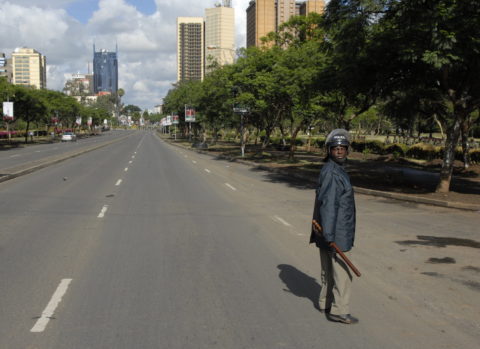 A policeman stands in Kenyatta Avenue, normally one of the busiest streets in Nairobi, after it was cleared by the police to try to prevent rallies organised by the opposition Orange Democratic Movement (ODM). The ODM were protesting against disputed election results which had kept them out of power.

ARTICLE 19 welcomes the decision by the Chief Magistrate Court in Kisumu, Kenya following an inquest into baby Samantha Pendo’s death, which has found the police responsible for her death. The six month old died due to injuries inflicted on her by law enforcement officers who were responding to protests in Kisumu during the August 2017 General Elections. She was one of 57 people killed during the protests, which were marked by police brutality against protestors.

The court found five senior police bosses who served in Kisumu during the 2017 general elections culpable for the death of the child.

In the ruling, Magistrate Beryl Omollo placed particular emphasis on senior officers involved in the policing of the protests, stating that “based on the command responsibility in the National Police Service, the Commanders in Charge of the operations at the Kilo Junction in Nyalenda Estate in Kisumu County on the night of 11.08.17 and early morning of 12.05.17 are found liable for the death of the deceased baby Samantha Pendo”. She directed the Office of the Director of Public Prosecutions to take appropriate action against Chief Inspector John Thiringi, Inspector Lina Kogey,  Senior Superintendent Benjamin Kipkosgey Koima, Senior Superintendent Christopher Mutune Maweu, and Commissioner of Police Titus Yoma in accordance with the law. Following the finding, a total of 31 police officers will now be investigated by the Office of the Director of Public Prosecutions (ODPP).

“This decision shows the families of those who were killed in the course of the 2017 elections and the protests around them that indeed there is hope that justice can be served, and those responsible can be held accountable,” said Henry Maina, Regional Director of ARTICLE 19 Eastern Africa. “We hope that this will be the starting point to ensuring accountability for those killed at the hands of police while exercising their right to protest around the elections.”

According to the Kenya National Commission on Human Rights (KNCHR), there were 57 fatalities, including minors, during the election related protests in Kenya, with most of these occurring in Nairobi and Kisumu.

None of these cases has so far been conclusively investigated, and the decision in baby Pendo’s inquest highlights the alarming level of police brutality, which has been used to suppress right to protest in Kenya.

ARTICLE 19 calls on the government to take urgent measures to better protect the right to protest in the country, and to: