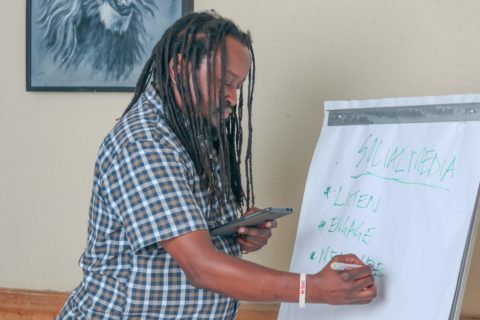 Activist Edwin Mutemi Wa Kiama has been released on bail but Kenyan activists say the conditions of his release are disproportionate to his alleged crime. Credit: ARTICLE 19 Eastern Africa

Human rights groups in Kenya have come together in solidarity with activist Edwin Mutemi Wa Kiama, who was detained on 6 April for publishing text, images and graphics on Twitter as part of the #IMFStopLoaningKenya campaign. Although he has been granted bail, the court action taken against him is disproportionate to his alleged crime, the groups say.

Their statement is below.

However punitive your bails are, our acts of resistance will only grow stronger

At best the conditions of the bail can be described as exorbitant, unjustifiable and unaffordable. The magistrate demanded a 500,000 Kenyan shillings (GB£3,332) cash bail and a gagging order that prohibits Mutemi from using his social media accounts or speaking about Covid loans —  outrageous in a country that proclaims all suspects are innocent until proven guilty.

Even as lawyers representing Comrade Mutemi appeal this stunningly cruel order we must send a message to Hon. Jane Kamau personally, stating that it is the dead hand of authority that we activists and rebels expose and resist every day, and with every ounce of our blood. Article 49(1)(h) of the Constitution recognises the right to bail of an accused person and provides the means by which restrictions can be imposed and monitored to balance the interests of the victims, protect the accused and meet the demands of the state.

The prosecution was obviously intent on holding Mutemi for as long as they wished when they came to court without a charge sheet citing a flippant “technological challenge” excuse that the magistrate allowed to fly by, adjourning the case for an extra day.

Then the prosecution sought leave from the court to detain the activist for 14 days in order to investigate him for the charges of violating the Cyber Crimes Act by publishing material online considered by them to have mocked the presidency for its excessive appetite for borrowing loans without accountability.

In her bail ruling, the magistrate dismisses the application by the Prosecution in its entirety but then proceeds to impose extremely unjust bail terms, a clear sign that instead of dispensing justice the magistrate chose to be complicit through her collaboration with the Prosecution, stating that she did this to make Mutemi “assist the police with investigations” — a duty we pay taxes for so that it can be carried out by the police.

Madam Kamau and the Executive, please take note that:

1. We will not surrender our vigilance and acts of resistance however punitive your bails will be.

2. We will not be silenced from pointing out dehumanising ideologies of totalitarian capitalism that borrows beyond what we can sustain.

3. However harsh state repression becomes our acts of resistance will only grow stronger.

4. We shall continue with these acts of resistance, however marginal, sacrifice our security and comfort, including coercion abetted by courts of law, until we are truly free and independent.

5. We shall continue to do so because it is the right thing to do.