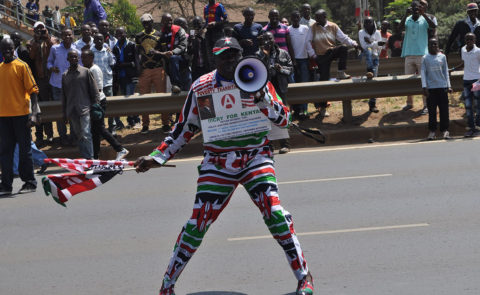 ARTICLE 19 is concerned about the arrest of three university students who took part in a protest against a proposed rise in tuition fees.

On 14 July, police arrested three University of Nairobi students for participating in a protest against a proposal to increase tuition fees. They were taken to the Central Police Station in Nairobi before being released later the same day without charge.

Earlier in the week, Professor Stephen Gitahi Kiama, the Vice-Chancellor of the University of Nairobi, announced a proposal to increase tuition fees. He noted that the fees had not been revised in the past 10 years and highlighted the changing needs of the students attending the university and industry trends in general.

In response, University of Nairobi medical students and representatives from the Kenya Medical Practitioners, Pharmacists and Dentists Union (KMPDU) organised a protest against the proposal. They argued that the increase of fees was drastic and unreasonable, especially coming at a time when the COVID-19 pandemic had ravaged Kenya with adverse effects on the economy.

In a worrying and continuing trend in Kenya, police violently dispersed the protesting university students using teargas and excessive force and arrested three protesters, who were later released without charge.

The University of Nairobi Students Association (UNSA) chair Eddie Mwendwa called off the protests awaiting an address from Professor Kiama. The UNSA chair asserted that the association’s next move would depend on the outcome of the statement and whether their grievances would be addressed. The students were also considering holding protests every Wednesday if the higher fees were not abolished.

Protests are an important way for citizens to express themselves and participate in governance processes. Article 37 of the constitution of Kenya (2010) expressly provides for this right. It is further provided for in the international agreements that Kenya has signed onto, including the International Covenant on Civil and Political Rights, as well as the African Charter on Human and Peoples’ Rights.

However, ARTICLE 19’s monitoring of protests shows that between January 2020 and June 2021 there have been at least 11 protests by university students that resulted in at least 14 arrests. One of these protests also called for proposals to increase tuition fees at Kisumu National Polytechnic to be rescinded.

Mugambi Kiai, the Regional Director for ARTICLE 19 Eastern Africa, said, “The cases of protesters being dispersed for not getting clearance from the police to hold gatherings, arrested for participation in peaceful assembly, point to a clear attempt by the state to silence dissenting voices and to suppress freedom  of expression. The government must recognise and uphold the legitimacy of the right to protest and recognise it as an essential and legitimate form of civic action and a key means through which rights holders can meaningfully participate in governance processes and effect change.”

The trend of police violently engaging with protesters only serves to delegitimise the right to protest and create a culture of fear where people refrain from exercising this right because they are wary of the likelihood of arrest or police using force. A case in point includes during the recent Saba Saba March For Our Lives, where police used teargas against protesters, attacked them, and arrested five people under the guise of COVID-19 regulations. ARTICLE 19 has also documented how COVID-19 regulations have been used to restrict the right to protest and have often been used to suppress free expression.

ARTICLE 19 calls upon the government of Kenya to recognise and uphold the legitimacy of the right to protest by refraining from arbitrary arrest and excessive use of force on protesters and investigating all allegations of human rights violations during protests with a view to bringing suspected perpetrators to account for their actions.