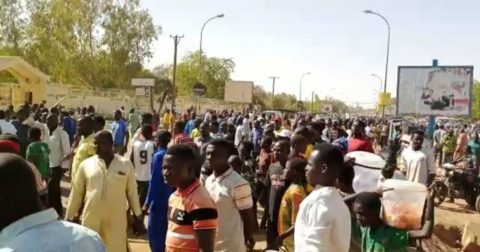 ARTICLE 19 strongly condemns the deaths in police custody of two brothers, Benson Njiru Ndwiga and Emmanuel Mutura Ndwiga, after their arrest for allegedly breaking COVID-19 curfew regulations. Following their deaths, on 5 August 2021, members of the community held a protest that resulted in the death of another person, allegedly at the hands of law enforcement officers.

On 5 August 2021, protests broke out when the bodies of Benson and Emmanuel were identified by family members at the local morgue. Benson and Emmanuel were last seen alive on Sunday 1 August 2021 when law enforcement officers reportedly arrested them for contravening curfew regulations. According to the family, the police informed them that the boys died as they tried to escape police custody. An autopsy report however indicated that their broken ribs and head injuries were caused by a blunt object, which was inconsistent with the claim by police. In response, community members organised protests, but instead of attempting de-escalation and resorting to non-violent means first, law enforcement officers used excessive force and live ammunition to disperse protesters. In a statement, the Acting Police Commander of Embu county confirmed the fatal shooting of one protester and reportedly called on protesters to “stop provoking” the officers.

“We offer our sincere condolences to the families of Benson and Emmanuel Ndwiga and the protester killed during the protest which followed. Whilst we welcome the swift move by the Independent Policing Oversight Authority (IPOA) to open investigations into the deaths, we call on the Kenyan government to recognise and uphold the legitimacy of the right to protest and desist from abusing the COVID-19 regulations to crack down on the right to freedom of assembly. Further, the use of live ammunition against unarmed demonstrators is unacceptable and goes against the Public Order Management Act, Police Service Act provisions, and regulations on use of firearms,” said Mugambi Kiai, Regional Director of ARTICLE 19 Eastern Africa.

ARTICLE 19  has been monitoring protests in Kenya and has documented at least 48 arrests and 1 death from at least 47 protests organised between 1 January 2021 and 31 July 2021. The organisation has raised concerns that since the advent of the COVID-19 pandemic, the Kenyan government has used its COVID-19 regulations to curtail the right to freedom of assembly. It is now common for law enforcement officers to disperse protests under the guise of enforcing COVID-19 regulations. In other cases, authorities have arrested and charged organisers and/or participants for failure to adhere to the regulations prohibiting public gatherings and failure to maintain social distance.

ARTICLE 19 urges the government of Kenya to abide by its obligations under the International Covenant on Civil and Political Rights to ensure the right to freedom of expression and the right to peaceful assembly.

The organisation reminds the Kenyan government that even during the COVID-19 pandemic, people must have avenues to express their opinions including through protest. Further, the right to life, as protected in the Bill of Rights and under international law, cannot be derogated at any time. The government must establish a clear obligation on law enforcement to attempt de-escalation and resort to non-violent means first and define clear criteria and thresholds for the different degrees of force and weapons to be used in public order management, including the setting of restrictions and prohibitions to ascertain full respect of the principles of necessity and proportionality.