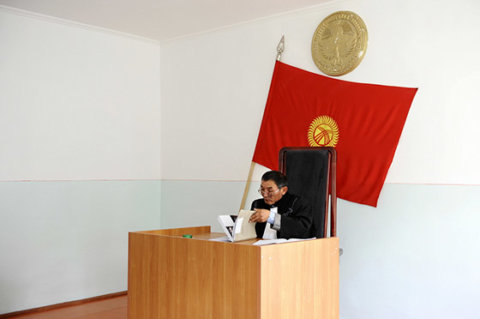 Members of the NGO coalitions against torture and other human rights groups in Kazakhstan, Kyrgyzstan and Tajikistan operate in an increasingly insecure environment. Existing NGO legislation in all three countries does not provide sufficient safeguards to activists and groups to freely exercise their human right to freedom of association and the organizations issuing this statement are concerned that new legislation is being prepared to further limit the space in which groups and activists can operate.

Local and international groups issuing this statement urge lawmakers to closely consult with NGOs in order to ensure that any legislation affecting civil society associations is strictly in line with international human rights law.

In all three countries activists, particularly those defending the rights of detainees held on charges involving “religious extremism,“ “terrorism“ or “undermining national security,“ are in many cases closely monitored by the authorities; and they and their organizations are targets of restrictive legislation and policies, negative political rhetoric and media propaganda.

In Kazakhstan, NGO registration is compulsory. Authorities enjoy wide discretion to deny such status and to close down groups for alleged violations of the law. The Constitution of the Republic of Kazakhstan prohibits “unlawful interference” in the activities of state agencies by public associations without clearly defining this term. On 4 July 2014, the government response to a parliamentarian who had suggested the further tightening of regulations concerning international NGOs in the country, was posted on the website of the Senate of the Kazakhstani Parliament, and indicated that laws affecting human rights groups are likely to be tightened even further. According to the response, the Foreign Ministry of Kazakhstan set up a working group to study the experience of other countries regarding international NGOs and foreign funding of domestic NGOs. Human rights activists believe that the stated concern about foreign funding indicates that the Kazakhstani authorities may follow the example of Russia in their efforts to further regulate NGO activities, where the recently introduced so-called “foreign agents law” has been widely used as a means of clampdown on independent civil society organizations leading to protracted court battles, huge fines and closure of several NGOs for refusing to brand themselves “foreign agents.” Another working group set up by the Ministry of Culture is drafting a law regulating NGO activities that, among other issues, is expected to further increase the reporting requirements of NGOs operating in Kazakhstan.

The new Criminal Code, signed by President Nursultan Nazarbaev on 3 July 2014 and expected to come into force in January 2015, and other related laws contain provisions that human rights groups believe could be used to harass NGOs and their members, and to hamper their activities. Among others, the new Criminal Code classifies “leading, participating in or financing unregistered or banned associations“ as criminal offences; criminalizes “unlawful interference” in the activities of state agencies by members of public associations; and characterizes leaders of public associations as a separate category of offenders and provides for stiffer penalties for them for a number of crimes.

In Kyrgyzstan, NGOs have also come under renewed pressure because parliamentarians recently re-initiated two draft laws inspired by Russian legislation: one requires NGOs to adopt the stigmatizing label of “foreign agents” if they receive foreign funds and engage in “political” activities, the other one prohibits propaganda of so-called non-traditional sexual relations, thus increasing the vulnerability of groups defending the rights of sexual minorities. Another draft law that had been put forward by parliamentarians earlier, but has not yet been adopted, significantly expanded the definition of “treason” so it is now open to abuse making it potentially  applicable to human rights activities. The re-introduction of these draft laws to parliament has been accompanied by negative rhetoric by public figures and has highlighted the vulnerability particularly of human rights NGOs.

In Tajikistan, the law “On public associations“ contains broadly worded provisions that have led to undue interference in the work of NGOs. Inspections have often been followed by warnings and legal actions against NGOs for alleged violations of the law. Courts may apply the disproportionally harsh sanction of closing down NGOs for any transgression of national law, however minor, and in numerous cases NGOs have been liquidated on purely technical grounds, such as the failure to re-register an organization after a change of legal address. For example, the Association of Young Lawyers Amparo, a member of the Coalition against Torture in Tajikistan, was closed down on such grounds in October 2012.

On 24 June 2014, the Constitutional Court of Tajikistan considered a petition by the Association of Young Lawyers Amparo stating that parts of the law “On public associations“ were not in line with the country’s Constitution. While the Court disagreed with Amparo’s reasoning, it did recognize that the law does not provide a clear list of grounds justifying the closure of an NGO. Thus, it recommended that Parliament analyze the legislation and insert appropriate amendments. There are concerns that rather than strengthening safeguards for NGOs, the new draft laws may be used to limit NGO activities even further.

In all three countries members of the coalitions against torture and other human rights groups have faced obstacles to their work that have made it difficult to carry out their activities effectively. For example, lawyers working on cases of alleged torture have on numerous occasions been denied access to detainees. This was also the case in the context of detentions of scores of men and women following riots in the city of Zhanaozen in the South-West of Kazakhstan in December 2011. The detainees were reportedly held in overcrowded cells, stripped naked, beaten, kicked and doused with cold water in the police station’s courtyard in sub-zero temperatures. Lawyers and independent human rights monitors were either denied access or not allowed to conduct any private interviews of detainees.

Members of the coalitions against torture and other lawyers and human rights activists have themselves been subjected to violence when carrying out their professional duties. For example, in Kyrgyzstan several lawyers defending ethnic Uzbeks detained in the context of violence between ethnic Kyrgyz and ethnic Uzbeks in the southern cities of Osh and Jalal-Abad in June 2010, have been threatened and physically attacked, even in the courtroom, with no accountability for the perpetrators. On 9 January 2014, ethnic Kyrgyz supporters of a Kyrygz man who had allegedly been killed by ethnic Uzbek Mahamad Bizurukov during the June 2010 violence, beat the defendant’s lawyer Dinara Medetova, his public defender Dina Ivashchenko and human rights defender Rysbek Amadaliev in the courtroom of Chuy Regional Court. The court was due to consider Mahamad Bizurukov’s appeal of a life sentence handed down by Osh Regional Court in 2012. The court had reportedly ignored Mahamad Bizurukov’s allegation that he had been tortured in detention to force a confession.

Human rights defenders and other civil society activists in the three Central Asian states have frequently been labelled as “foreign agents,“ “traitors,“ or “destructive elements” in public discourse, increasing their vulnerability. Most recently, the case of Alexander Sodiqov, a PhD student of Toronto University (Canada), has alarmed activists. He was detained in Tajikistan’s Gorno-Badakhshan Autonomous Region on 16 June 2014 while he was conducting academic research for his university project. The next day the Region’s State Committee for National Security issued a statement accusing him of spying for foreign governments. Human rights defenders believed the authorities were using the accusation of espionage as a pretext to suppress independent research which involves foreign partners and international cooperation. Amnesty International has adopted him as a prisoner of conscience.

Authorities should respect their obligations under international human rights law

In its October 2013 resolution on “The rights to freedom of peaceful assembly and of association“, the United Nations Human Rights Council highlighted the “importance of civil society, to good governance, including through transparency and accountability, which is indispensible for building peaceful, prosperous and democratic societies.“

In his April 2013 report to the United Nations Human Rights Council, Maina Kiai, the United Nations Special Rapporteur on the rights to freedom of peaceful assembly and of association, pointed out that “[a]ssociations, whether domestic- or foreign-funded, should […] be free to promote their views – even minority and dissenting views, challenge governments about their human rights record or campaign for democratic reforms, without being accused of treason and other defamatory terms. Dissenting views should be seen by the authorities as an opportunity for dialogue and mutual understanding.“

The authorities of Kazakhstan, Kyrgyzstan and Tajikistan are parties to the International Covenant on Civil and Political Rights (ICCPR) and have thus committed themselves to ensure that “[e]veryone shall have the right to freedom of association with others“ (Article 22 of the ICCPR). Local and international human rights groups issuing this statement urge the authorities of the three Central Asian states to build on this commitment and act in its spirit by implementing the following key recommendations as a matter of urgency. They should: