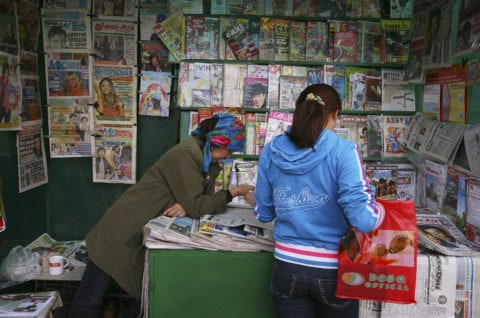 A young woman buys a magazine at a street kiosk.

In May 2015, ARTICLE 19 and the Media Law Centre in Astana, Kazakhstan, submitted an individual complaint to the UN Human Rights Committee on behalf of the Kazakhstani newspaper Pravdivaya Gazeta, regarding its forced closure.

The newspaper, which was known for its outspoken criticism of the Kazkakstani authorities, had faced persistent legal harassment following the publication of its first issue in April 2013. Authorities in Kazakhstan filed a series of administrative cases against the newspaper’s owner and chief editor, based on minor administrative offenses, including listing an incorrect press run in the paper and an incorrect date of issuance. Following these charges, publication of the newspaper was repeatedly suspended and the owner and editor fined, until it was formally closed further to a decision issued by a district court in Almaty, in February 2014.

ARTICLE 19 and the Media Law Centre believe that Kazakhstan violated the rights of Pravdivaya Gazeta’s chief editor and owner to freedom of expression, as well as violating the owner’s right to a fair trial. The complaint submitted to the UN Human Rights Committee requests that they oblige Kazakhstan to ensure that both the editor and owner have access to effective remedies, and to take measures to prevent similar violations in the future, including by reviewing and making amendments to the Law on Mass Media and the Code of Administrative Offences, in order to bring them into compliance with international human rights standards.