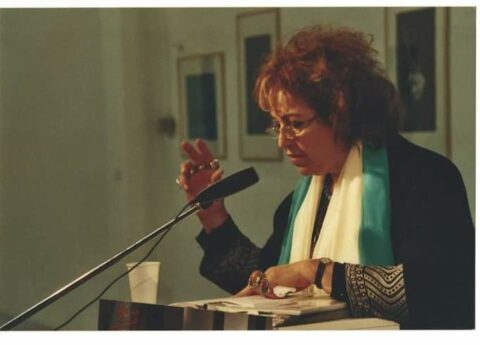 ARTICLE 19 condemns the widespread incitement campaign against the Jordanian poet and writer Zulaikha Abu Risha, launched by extremist groups because of her views and ideas, and declares its absolute solidarity with her. It also calls on the judicial authorities to drop all lawsuits brought against her for her Facebook posts and calls on the security authorities to guarantee her physical protection and to pursue all those who called for her to be attacked.

Last September, the Public Prosecution Office of Amman raised several lawsuits against Dr. Zulaikha Abu Risha over her Facebook posts in August 2021 expressing her opinion that the voices of people who recite the Qur’an or perform the call for prayer should be harmonious and that their calls should sound good to the ears.

Subsequently, she was brought before the Amman Criminal Court as a defendant on the grounds of having committed the crime of insulting the religious feelings of others as stipulated in Article 278 of the Penal Code[1].

ARTICLE 19 emphasises that the right to freedom of expression is of vital importance in democratic societies because of its role promoting public debate and the individuals’ participation in public life. On this basis, imposing restrictions on individuals simply for expressing their opinions and ideas and subjecting them to harassment is a source of great concern.

The Jordanian authorities must guarantee the right to freedom of expression in all areas, including in religious matters. This right is directly linked to and essential to all public affairs. ARTICLE 19 also calls on senior officials in Jordan to confront incitement and hatred targeting intellectuals and to encourage individuals to renounce violence and move towards social dialogue as a mechanism for democratic debate.

The Kingdom of Jordan has ratified the International Covenant on Civil and Political Rights since 1975 and is therefore obligated to respect the right to freedom of expression enshrined in its Article 19. In this context, the Human Rights Committee has emphasised that this covenant contravenes “the prohibition against showing disrespect for a religion or another belief system, including blasphemy laws”[2].

The crime qualified to sue writer Zulaikha is considered one of the most popular accusations used to sue intellectuals, human rights defenders and religious minorities, as every opinion in the religious field that is different from the opinions of the majority in society or the opinions of those in power is qualified as an insult to sanctities or religious feeling and, as a result, requires judicial proceedings.

In the same context, the Special Rapporteur on freedom of religion or belief recommended that the right to freedom of expression be guaranteed “regardless of the critical nature of the opinion, idea, doctrine or belief or whether that expression shocks, offends or disturbs others, so long as it does not cross the threshold of advocacy of religious hatred that constitutes incitement to discrimination, hostility or violence.”[3]

Various individuals on social media called for Zulaikha to be punished for insulting Islam. A cleric also asked the Minister of Awqaf (equivalent of Religious Affairs) to sue her because of her violation of Islamic sanctities, thus declaring her an apostate and endangering her life.

ARTICLE 19 calls on senior officials in Jordan to denounce practices that create an atmosphere of terror that intimidates individuals from speaking out freely. It should be noted that this fierce campaign against opinions and ideas in the religious field is not isolated, but rather comes in the context of numerous opinion trials, including the lawsuits filed against Dr. Wafaa Khadra and lawyer Zaid Nabulsi, which increases our concern about Jordan’s ability to fulfil its international obligations regarding human rights.

According to the Rabat Action Plan[4], Jordanian authorities have an obligation to pursue speech that, within the context of Article 20 of the International Covenant on Civil and Political Rights, constitute an advocacy to national, racial or religious hatred that constitutes incitement to discrimination, hostility or violence. However, we note in the Zulaikha case that the opposite happened, as Zulaikha appeared on 13 October, 2021 before the court, while instigators remained at large.

In this context, the Special Rapporteur on freedom of religion or belief stressed that “political and religious leaders should refrain from using messages that may incite violence, hostility or discrimination, that they should speak out firmly and promptly against “hate speech”.”[5]

A joint declaration by the Special Rapporteurs on Freedom of Expression around the world issued last month also called on political parties, politicians and senior public officials “not to make statements that are likely to promote intolerance, discrimination or dis/misinformation and should, instead, take advantage of their leadership positions to counter these social harms and to promote intercultural understanding and respect for diversity.”[6]

Therefore, the Jordanian authorities must promote the right to freedom of expression in order for that right to be an effective mechanism for public and free discussion of different opinions and ideas without any threat or intimidation.

In light of what has been explained above, ARTICLE 19 calls for the charges against Dr. Zulaikha to be dropped immediately. We call on the judiciary to respect the provisions of the Jordanian constitution and ratified international treaties by guaranteeing the right to freedom of expression and the physical and moral inviolability of all individuals who express opinions and ideas contrary to the beliefs of others, even if they are a majority.

[1] Article 278 of the Jordanian Penal Code stipulates that “A penalty of imprisonment not exceeding three months or a fine not exceeding twenty dinars shall be imposed on anyone who:

[3] The Special Rapporteur’s report on freedom of religion and belief, March 22nd, 2019, paragraph 55

[4] The Rabat Action Plan is available on:

[5] The Special Rapporteur’s Report on freedom of religion and belief, March 22nd 2019, paragraph 19