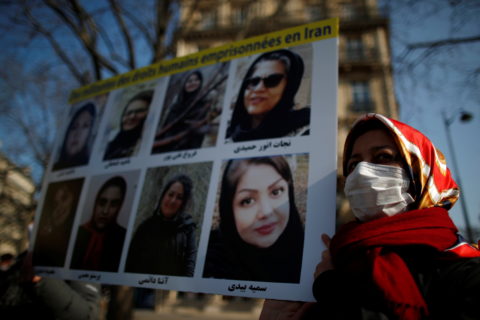 The rise to presidency of Ebrahim Raisi, an individual who must be criminally investigated for crimes against humanity due to his well-documented involvement in the prison massacre of 1988, is a clear signal to the people of Iran and the world that the country’s human rights crisis will continue unabated.

“The fact that an individual who must be criminally investigated for the most serious crimes under international law is instead awarded with positions of power is deeply disturbing. It is high time for the international community and in particular members of the UN Human Rights Council to take concrete measures to end endemic impunity in Iran,” said Saloua Ghazouani, Director of ARTICLE 19’s Middle East and North Africa Programme.

The 19 June 2021 announcement of Raisi as Iran’s next president came after an inherently and structurally discriminatory election process that excludes women and members of religious minorities while manifestly failing to vet those implicated in human rights violations from holding positions of power.

In addition to being a member of the “death committees” in 1988, Ebrahim Raisi, as the Head of the Judiciary since March 2019, has overseen the arbitrary arrest and detention of thousands of individuals including political dissidents, journalists, peaceful protesters, human rights defenders and members of ethnic and religious minorities and has systematically conducted unfair trials. During his tenure, the use of the death penalty against political dissidents has increased alarmingly, including the execution of dissident journalist Rouhollah Zam in December 2020.

The Judiciary, under his oversight, has also failed to conduct investigations into gross violations of human rights and international crimes including the killing of hundreds of unarmed protesters during the November 2019 nationwide protests, as well as the torture and other ill-treatment of those arrested and detained during and in the aftermath of the protests. Such failure in itself constitutes a human rights violation.

Raisi’s rise to presidency has come within a context of escalating repression manifested, among others, through parliament’s introduction of retrogressive laws. Several pieces of legislation that contravene Iran’s international human rights obligations have either been passed or are expected to pass into law shortly. They include laws pertaining to criminalisation of “insulting legally recognised religions and Iranian ethnicities”, access to information, sexual and reproductive rights, data protection and social media platforms. The passage of such laws will further erode the rights of women, children, ethnic and religious minorities, the LGBTQI community, human rights defenders, activists working on political, social, and cultural issues and any individual who wishes to exercise their human rights.

The increase in arrests of social media users under the tenure of Raisi as the Head of the Judiciary, coupled with legislation his Judiciary approved to further censor online platforms, is particularly concerning. Speculation about the appointment of figures close to Iran’s Supreme Leader who have been behind many projects related to building national platforms to strengthen the National Information Network, including the Minister of Information and Communication Technology (ICT), is also alarming.

ARTICLE 19 has extensively documented the instrumental role the National Information Network has taken in the implementation of Internet shutdowns, in particular during the November 2019 anti-establishment protests when near total blackout facilitated the deadly and violent suppression of the protests. We are gravely concerned that the Ministry of ICT will further consolidate a system of “tiered access” to the Internet, strengthen the National Information Network, and ultimately shrink further the already diminished space for freedom of expression.

Iran’s civil society and the courageous community of human rights defenders have continued their quest for truth, justice and respect for human rights in the face of ever-escalating repression and risk of persecution. They include women’s rights defenders, women protesting against obligatory veiling, lawyers, trade unionists, journalists, ethnic and religious minority activists, individuals taking to the street to peacefully protest and demand their rights and the families of victims of human rights violations.

The international community must act now to side with them and support their work. Most importantly, all United Nations member states must ensure that they establish their competency to exercise universal jurisdiction over the most serious crimes under international law such as torture and crimes against humanity and to criminally investigate and prosecute those suspected of their commission when present in their territory. Members of the Human Rights Council must also take measures to address the persistent  crisis of impunity by establishing an impartial and independent investigation and accountability mechanism on Iran.

We ask States to express their condemnation of human rights violations in Iran explicitly and publicly and ensure that human rights are at the heart of any negotiations with Iran, especially regarding its nuclear activity and the lifting of sanctions.