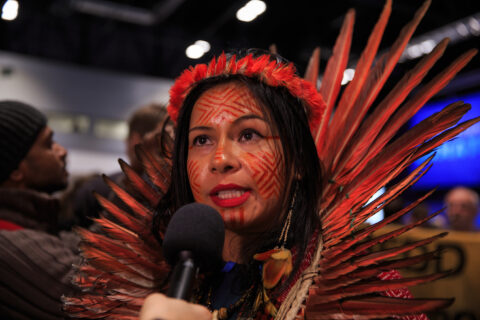 Despite heroic efforts of a few individuals during COP26, leaders have failed to recognise the urgency of the climate crisis. Instead they have continued with politics-as-usual. The call to action —  to all of us —  that we have been waiting to hear simply has not come.

The deal struck in Glasgow is a devastating blow for the environment, communities and countries already suffering from rising temperatures and disruption to natural habitats. It does little to provide hope, yet somehow we must continue to believe an effective response to the crisis is possible.

That lifeline of hope rests as much in the hearts and minds of those who are on the frontline in vulnerable locations from California to Bangladesh as it does in those who lead commerce in polluting industries, from meat to oil, and those who have the power to develop behaviour-reforming policy change.

If the connection  between the climate  crisis, transparency, accountability and human rights wasn’t clear before, COP26 has made it so.

For decades, politicians in charge of the most powerful countries in the world have been unwilling to listen to people on the frontline of climate-induced destruction and those who have raised the alarm. As the summit got underway, the government of the United Kingdom stated COP26 would be an inclusive conference, and UK politicians joined other world leaders in reminding people that everyone has a part to play and that everyone has responsibility to help reverse the damage already caused.

And yet, when it came to the event people campaigning for real action to be taken — indigenous groups, development organisations, environmental and climate justice campaigners, academics, researchers and women’s groups among them — were excluded from the debate. While some attended as observers, they were not allowed access to the decision-makers and influential delegates shaping policy. Many others were unable to travel, hindered by the cost or the UK’s tough immigration policies, as well as by COVID-19 restrictions.

There is no doubt we are all in this together. Yet overshadowing the absences and exclusions to the event, an even more damning omission has been made. The language emerging from COP26 completely fails to call for the protection of environmental activists, who face the highest levels of violence and death of all human rights defenders around the world.

ARTICLE 19 was among the many organisations and individuals calling for the strengthening of commitments for the protection of environmental human rights defenders, yet none of these commitments feature in the resolutions coming out of COP26.

We must work to make this a reality, for it is the defenders, the people who really have an understanding of what’s at stake and what needs to be done, who witness the destruction of their habitats, who are defending their families during floods and fires, who make sure the world hears when crops fail and famines are on the horizon.

People must grasp the opportunity to be a part of a new, more inclusive decision-making process because it is freedom of expression and greater transparency that are central to this movement to take real action on the climate.

Politicians and big business must listen and they must incorporate the needs and rights of the citizens and consumers they are meant to serve.

Genuine sentiment must be matched by genuine action.

Climate justice campaigners noted that a 10-year plan for an “action for climate empowerment” was rushed through and fails to foster true participation, access to information and environmental education. Yet, prior to COP26, there have been some positive developments. For instance:

The Paris Climate Agreement, implemented in 2020, laid important parameters and mandated countries to take individual pledges to combat climate change. Although it was up to individual countries to decide their timelines for this, they pledged to report on and be fully transparent about progress, or lack thereof.

During COP26, the measures for transparency ARTICLE 19 recommended were adopted, and an enhanced transparency framework will become operational for reports submitted in 2024. It is encouraging that the 200 or so countries have agreed to greater transparency so they can be held to account — but of course, it stops well short of being a real commitment to bring the climate warming down and limited to 1.5 degrees Celsius.

Why freedom of expression matters for climate action

Rapid effective action on the climate remains illusionary: we are simply not moving fast enough to avert catastrophe.

Freedom of expression and the right to information are essential to understanding climate change and how to help tackle it. They are vital for identifying populations at risk, and how their rights should be protected. Making information about climate change public and accessible, encouraging public debate on the key issues and building strong educational infrastructure to shape these are all key.

Achievements at COP26  — and there were some — were no doubt made possible by activists, academics, individuals and communities with direct relevant knowledge. They include the Glasgow Leaders’ Declaration on Forests and Land Use, which aims to stop and reverse forest loss and land degradation by 2030, and which was signed by 120 countries, and the Global Methane Pledge, signed by over 100 countries, which commits to reduce global methane emissions by 30% by 2030.

As we approach International Women Human Rights Defenders Day on 29 November, it is a chance to acknowledge the work of environmental rights defenders around the world, to strengthen and support them so that their expertise, experience and voices shape the solutions we must find now. Freedom of expression is at the heart of this work. It is up to each and every one of us to play our part in holding governments, business and leaders everywhere to their promises and pledges from COP26 with urgency and persistence.

COP26 is a call to action on transparency