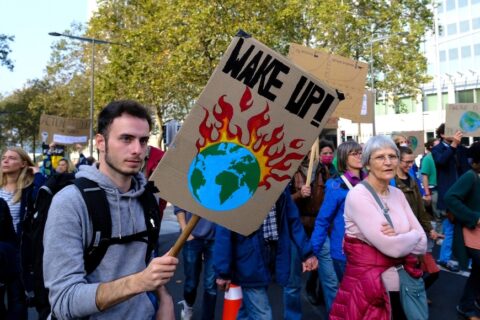 Demonstration against climate change ahead of the COP26 climate summit, 2021. Photo: Alexandros Michailidis/Shutterstock

As the United Nations Climate Change Conference (COP26) launches today in Glasgow, Scotland, ARTICLE 19 calls on states to intensify efforts to implement obligations agreed on in the Paris Climate Agreement, which came into force in 2020.

The decisions taken this week are undoubtedly the most significant imaginable to us all and it is because they will have a lasting impact on our lives, and on the planet, that ARTICLE 19 is calling for greater transparency and the strengthening of commitments for the protection of environmental human rights defenders.

The Paris agreement represented a tectonic shift in the legal protection of the climate from a standard-setting approach to a regulatory model based on a “bottom-up” governance where states themselves determine the global response to climate change by feeding their plan into international frameworks, known as the pledging approach.

The new pledging approach in the Paris agreement sets out a way to gain more participation from states to commit on tackling climate change through a flexible way to govern the environment based on each country’s national context and capacities. Nationally Determined Contributions (NDCs) strengthen the long-term mitigation goal agreed in Copenhagen in 2009 to limit the increase of the global average temperature to below 2°C above pre-industrial levels.

All efforts are now pointing towards a temperature increase  of 1.5°C  and there is an intense urgency to this work.

NDCs are the pillar of the Paris Agreement: they must be prepared, communicated, and maintained, although states have complete discretion on the content and timeframe. This logic should allow for rapid implementation of each country’s commitments and ensure participation equally for developed as well as developing countries. Results then depend on the extent states put forward to take robust domestic mitigation measures, engage in the review process, and strengthen commitments over time.

Transparency is critical to this process because pledging can enable the global community to hold countries accountable to their promises and push them if their pledges are not ambitious enough. Hence, pledging can benefit greatly from reporting mechanisms. Reporting and review requirements under the Paris Agreement include provisions under both Articles 6 and 13 relating to the implementation and achievement of parties’ NDCs.

COP26 in Glasgow is crucial, and much of the focus will be on what timeframe should be covered in future NDCs and what information should be included as a minimum. A reference to environmental human rights defenders has also been included in a climate treaty for the first time.

The flexibility in term of timeframes for the submission of NDCs has resulted in asymmetric reporting against a global stocktake process to assess collective progress every five years. The Paris agreement only provided that by 2031 all countries should submit NDCs on the same schedule, so while in Glasgow, countries will decide whether reports to be submitted by 2025 should cover 10 years with implementation starting in 2021, or five years, or a 5+5 framework, with first five-year targets and then10-year targets being indicative. The hope is that the NDCs timeframes will align to the global stocktake so a five-year timeframe will allow countries to think more in short term and ensure more target actions towards the climate emergency.

The other transparency priority at COP26 is to ensure progress on the rules for uniformity on national reporting. The Paris Agreement establishes in Article 13 an Enhanced Transparency Framework (ETF) for reporting and review to ensure the transparency of mitigation and adaptation actions and the transparency of support. The Subsidiary Body for Scientific and Technological Advice (SBSTA) discussed creating a common reporting format for tracking progress on NDCs. The Subsidiary Body for Implementation (SBI) is expected to conclude “technical work” that will supersede the existing international assessment and review process. Discussion will focus on the flexibilities that parties may use to support their climate reporting.

In Latin America and the Caribbean, the regional “Escazu Agreement” went into force in April 2021, providing for strong protections for environmental human rights defenders (EHRDs). In Europe, parties taking part in the UNECE Aarhus Convention approved the creation of a new Rapid Response Mechanism with a Special Rapporteur during the last week of October 2021. Globally, both the United Nations Environment Programme and the Office of the High Commissioner for Human Rights have strengthened efforts to protect defenders, as set out in “Strengthen Environmental Rule Of Law And Protect Environmental Human Rights Defenders,” part of a report that highlights problems EHRDs face.

There are also long-standing concerns over the treatment of environmental protesters, with often overly harsh restrictions and punishments being imposed upon them.

Rather than prosecuting activists or worse, there must be a reversal of persecution and harassment of those who see the true cost of inaction on climate change.

Freedom of expression and the right to information are essential to adequately understand the human effects of climate change.  They help in developing approaches for identifying which populations are at risk, and how state and non-state actors should act to protect the rights of those populations.

Publicly-accessible information, public participation and public debates on climate change are practical ways to enhance governmental action against global warming.  They must become critical elements of climate change strategies around the world.

Changing the Climate for Freedom of Expression and Freedom of Information