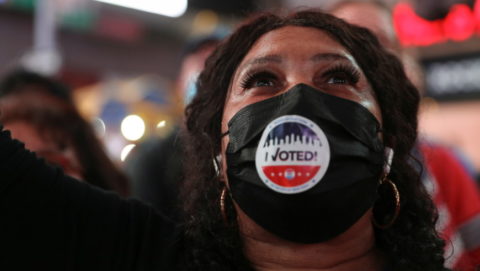 Joe Biden has been announced as America’s 46th president-elect. What can we expect from him on freedom of expression?

We watched the celebrations in cities throughout the US following the announcement that America has elected its 46th president Joe Biden.

The results offer a new approach to human rights after a challenging four years, where a free press was under repeated attack by the political leadership. A new administration gives us hope that America can once again champion protesters, journalists and those seeking to express themselves freely despite attacks around the world.

*If the interactive map doesn’t display for you, please visit this page.

But there’s still a long way to go. Our recently-published Global Expression Report tracks freedom of expression for 161 countries. It shows how freedom of expression has been steadily eroded around the world over the past decade.  The US has not escaped this decline, and the decline is not an accident.

How has this happened?

As our report shows, in 2019, President Trump set new records for his public attacks on the press, naming media outlets as ‘fake news’ 273 times. There was also a rise in access to information denials and local and state government restrictions against access for media to public interest events. Protests became more dangerous for journalists, with assaults at Trump rallies in Texas and Florida. Alongside this, the Justice Department continued to pursue charges against WikiLeaks founder Julian Assange under the Espionage Act; a case which could criminalise the news-gathering process.

How did this play out during election campaigning?

The 2020 US election has seen voter suppression attempts on an unprecedented scale. Those seeking marginal advantage in voting populations have systematically sought to disenfranchise people.

The measures that take away the ability of people to vote through changes in laws were not enough, and not always successful.  So a huge variety of “softer” voter suppression efforts have been used.  These ranged from a massive disinformation campaign online, to the Governor of Texas limiting the number of drop boxes for ballots to one per county – sometimes covering hundreds of square miles – to robo-calls in recent days telling people to “stay safe and stay home” or avoid long lines at the polls by voting on November 4th a day after the election.

Why does this matter?

Those in power know that control of information and people’s voices is absolutely crucial to maintaining power. Our report and the research by the Varieties of Democracy Index demonstrates how an erosion of expression is a forerunner to an erosion in electoral democracy.

Courts cannot forget that voting is a protected form of speech, one of the most powerful and meaningful forms out there.

So what’s next for democracy and free speech?

In an article for Foreign Policy, Joe Biden sets out the steps he will take to renew US democracy and alliances, protect its economic future and ensure America leads the world.

He writes that the cornerstones to his administration will be:

“The world needs a clear, consistent, and powerful voice that supports human rights and freedom of expression, engaging in the key debates that will define whether we continue to slide towards autocracy or reinvigorate democracy.  President-elect Biden’s priorities are a welcome signal that the US will be taking up this challenge.”
– Quinn McKew, Executive Director of ARTICLE 19

How would you describe the election result in three words?