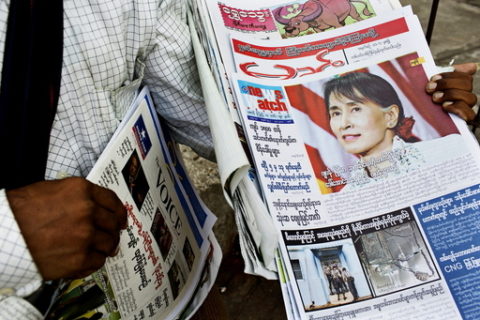 ARTICLE 19’s full statement during the interactive dialogue with the Special Rapporteur on Myanmar at the 45th Session of the Human Rights Council.

ARTICLE 19 welcomes the new Special Rapporteur, and share his concerns regarding the continuing threats to human rights as Myanmar approaches general elections.

The Union Election Commission has threatened criminal sanctions against the leaders of a ‘no-vote’ campaign and has required all political parties to submit campaign messages for censorship prior to broadcast on state-owned radio and television stations.

The Myanmar government has doubled-down on efforts to suppress expression critical of the military or incumbent government, blocking the website of campaign group Justice for Myanmar. These measures, among others, raise serious concerns about the ability of those in Myanmar to engage in genuine political debate in advance of the elections.

We are concerned that a growing number of human rights defenders, particularly those working on conflict-related issues, have faced harassment and intimidation from authorities. Several activists have been prosecuted in recent months under the Peaceful Assembly and Peaceful Procession Law for highlighting military abuses.

Severe Internet restrictions remain in place in Rakhine and Chin States, preventing access to information about the COVID-19 pandemic or the elections and hampering the work of journalists. We call on the government to urgently restore full Internet access in all affected areas.