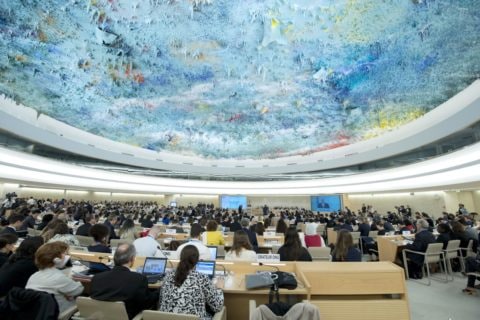 This is our joint statement during the adoption of the UPR outcome of Turkey at the 45th Session of the Human Rights Council. The statement was delivered by independent journalist Banu Guven on behalf of ARTICLE 19, European Centre for Press and Media Freedom, English PEN, Freemuse, IFEX, International Press Institute (IPI), PEN International, PEN Norway and Punto24.

On the same day that Turkey was undergoing its UPR on 28 January 2020, civil society leader Osman Kavala was standing trial in an Istanbul courtroom on spurious charges. He remains arbitrarily detained despite a European Court of Human Rights decision ruling for his release.

While we therefore welcome Turkey’s acceptance of a number of recommendations on safeguarding freedom of expression, Turkey’s response to its UPR, as well as its continued efforts to suppress free expression since its review, reinforces our serious doubts over its commitment to fulfilling its human rights obligations.

The Turkish authorities accepted recommendations to create a safe and enabling environment for journalists and human rights defenders. However, this is inconsistent with its rejection of recommendations to end arbitrary arrests of civil society actors. As part of intense efforts to repress dissent, dozens of journalists and media workers are currently in detention for conducting their vital work. We remind Turkey that these violations are categorically incompatible with the right to freedom of expression, and urge the authorities to immediately release all civil society actors in detention and end judicial harassment.

Turkey did not accept a significant number of recommendations to amend the Anti-Terror Law and other counter-terrorism legislation, claiming that the law is already in line with international standards. This is simply not the case: existing counter-terrorism legislation contains unduly broad and vague concepts, and has been abused to target civil society for the exercise of their right to freedom of expression. Striking examples of this include the prosecution and detention of novelist Ahmet Altan, politician Selahattin Demirtaş and journalist Nedim Türfent. Human rights defenders, journalists, politicians, artists, academics, lawyers and even doctors routinely face legal harassment using this law. Journalists, human rights defenders and politicians jailed under terrorism charges simply for doing their jobs, were excluded from a prison release programme, initiated after the outbreak of COVID-19. We call on Turkey to immediately amend counter-terrorism laws in line with international standards, ensuring “terrorist acts” are defined in a precise and narrow manner.

Turkey failed to accept any recommendations to decriminalise defamation. Article 299 of the Penal Code, has been widely abused to silence criticism against the President. Between 2010 and 2017, 12,893 cases were filed for defamation of President Erdoğan. We urge Turkey to repeal these provisions, which are inherently incompatible with the right to freedom of expression.

On 28 September, ARTICLE 19 and partners organised an online panel discussing Turkey’s record over the last four-year cycle, in reaction to Turkey’s adoption of the UPR and giving an update on the latest developments – watch the recording here: