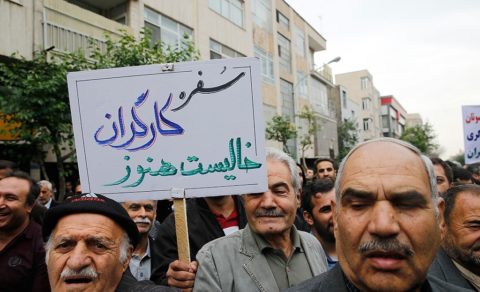 ARTICLE 19 delivered the following oral statement at the 43rd Session of the UN Human Rights Council during the Interactive Dialogue with the Special Rapporteur on the situation of human rights in the Islamic Republic of Iran.

We share the Special Rapporteur’s deep concerns about the repression of human rights defenders, and dissenting voices in Iran, facilitated by the continued abusive application of a restrictive legal framework, and abuses by the security forces. Since November 2019, authorities have applied excessive and even lethal force against protesters, making it one of the bloodiest periods in Iran since the 1979 Revolution. The death toll ranges from verified reports of 304 killings to unconfirmed reports of 1,500 killings, with thousands of other protesters injured or arbitrarily detained by security forces simply for exercising their rights.

Amir Hossein Moradi, Saeed Tamjidi, and Mohammad Rajabi, protesters from Tehran, were sentenced to death on trumped-up charges of “cooperating in vandalism and arson” under Article 687 of the Islamic Penal Code: they must be immediately, and unconditionally released, and their convictions quashed.

ARTICLE 19 calls on Iran to open independent, effective, and transparent investigations into the excessive use of force against peaceful protesters: those responsible must be held to account in courts of law, and the victims granted access to remedies.

We are deeply concerned by the authorities’ accelerating efforts to control freedom of expression and information online. The unprecedented internet shutdowns during recent protests frustrated the organisation of peaceful assemblies and prevented effective monitoring of rights’ violations by security forces: we remind the government and this Council that such measures violate international human rights law, and must be condemned.

The authorities’ continued development of the National Information Network, threatens to cut Internet users off from the global Internet, further undermining access to independent, pluralistic, and diverse sources of information in the country.

We are concerned that restrictions on the free flow of information online have exacerbated the recent coronavirus outbreak in the country: the government must commit to fulfil its international legal obligations to guarantee the right to information, in particular in times of crisis.