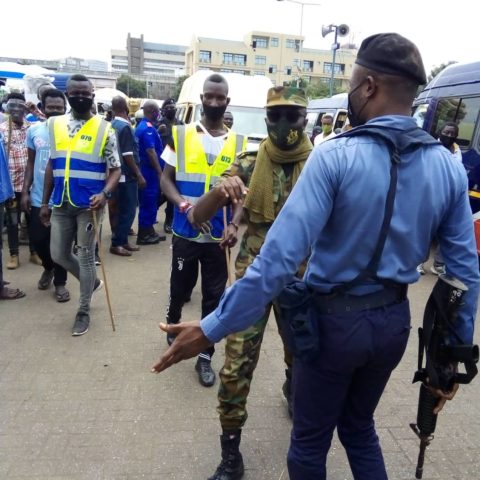 A soldier confronts a reporter for just taking pictures. Photo taken by a local media reporter.

ARTICLE 19 is gravely concerned about the recurrent attacks against journalists and urged the Ghanaian authorities to take all necessary measures to increase the protection of the media and security of journalists.

The organization further urged the authorities to conduct independent and transparent investigations of all reported attacks with a view to bring to justice those suspected behind the attacks.

“Violence against journalists is absolutely unacceptable. The state has a responsibility to guarantee safety and protection of journalists and media outlets. These attacks intimidate journalists and could lead to self-censorship when covering stories that may be risky. The Government must investigate these attacks and create an enabling environment for journalists and prioritise their safety,” said Fatou Jagne Senghore, Regional Director of ARTICLE 19 West Africa.

In the last four months at least five attacks against media professionals were reported by local sources.

On 12 August, 2020, according to media reports, Sanley Nii Blewu and Joseph Amstrong, two TV3 reporters, were threatened at the Tema Station in Accra where they were on duty to file a television report on sanitation. Security personnel comprising some soldiers, police and members of the AMA taskforce forced the journalists to delete the images they took. One of the two journalists alleged that one of the soldiers used his boots to hit the chest of his fellow journalist, smashed his camera, took his phone and took him to  the custody

On 7 July  Emmanuel Pacome was attacked by students of the high school based at Kukurantumi in the Eastern Region of Ghana while covering their attacks on officials of the West African Examination Council (WAEC). The officials, who were supervising the ongoing WASSCE examination in their school, were allegedly accused of being too stringent. After the police were called to intervene, some students directed their anger at the journalist they had spotted filming their disorderly behavior. Pacome, who was injured and had his equipment seized, reported the case to the police.

On 6 July, according to the Savannah Regional wing of the National Democratic Congress Abraham Ananpansah, a journalist with PAD FM in Damango was attacked by a representative of the New Patriotic Party (NPP) in the Savanah Region.

On 20 June, police harassed and arrested a journalist briefly for taking pictures at NPP primaries. The journalist, Rebecca Asheley Armarh, was reporting in Tema Manhean for the Kingdom FM.

On 5 April 2020, Yusuf Abdul-Ganiyu, Managing Director of Zuria FM and Deutsche Welle correspondent was attacked and beaten by a member of the security forces while he was in Kumasi, north-western Ghana, to cover the effectiveness of the Coronavirus lockdown.

“These attacks against journalists are a threat to freedom of media and expression. They are an obstacle to the right to information since they tend to block free access to and circulation of information. Politicians and public institutions must allow journalists to report on their policy measures freely. They should never intimidate journalists for just covering their public activities,” said Fatou Jagne Senghore.

Investigations into attacks against journalists needed

Both Ghana’s laws and international human rights standards require the state to prevent, prohibit and investigate crimes against journalists.  But in practice, this doesn’t happen. For example, the perpetrators of last year’s murder of the journalist Ahmed Hussein-Suale are yet to be brought to justice. The police initially arrested six persons on suspicion of involvement in the killing, but later released all of them due to lack of evidence. Since then, no one has been held accountable for the killing of Ahmed Suale.

Ghana’s constitution recognizes media freedom and independence, which creates the obligation for the authorities to protect journalists.

Ghana should also comply with the African Commission Declaration of Principles on Freedom of Expression and Access to Information in Africa  which requires states to “take effective legal and other measures to investigate, prosecute and punish perpetrators of attacks against journalists and other media practitioners, and ensure that victims have access to effective remedies.”

In all of the above cases, no thorough investigation was conducted by judiciary authorities, let alone a prosecution of those responsible to account for their acts and discourage new perpetrators to attack journalists.

“Ghana can’t continue to ignore its laws and international obligations when it comes to the security and protection of the media. The attacks cannot remain unpunished. We urge the government to investigate each of the cases and bring to justice those suspected to be responsible. Security forces and political parties should advise their members on the obligations to protect journalists and media outlets and sanction incurred by those of them who ignore the obligations”, insisted the Regional Director of Article19, West Africa.

ARTICLE 19 interviewed three journalists, including a victim, on the recurrent attacks against journalists and impunity.

“Journalism is not a crime. Strong democracy needs strong and independent media outlets to inform citizens, to ensure positive engagement and to hold those exercising or aiming for public mandates accountable. We should be protected as other workers. Perpetuating the cycle of impunity will only increase the risks for journalists in Ghana and kill slowly the right to information in Ghana”, said an anonymous journalist who was also victim of an ill treatment.

The Ghana Journalists Association (GJA) has been advocating an end to impunity for crimes against journalists. Condemning the attacks and inaction of the authorities, the GJA President, Affail Monney echoed fears over potential deterioration of security of journalists as the 7 December 2020 Presidential and parliamentary elections approach:

“All eyes are on Ghana to either maintain her democratic credentials or scale them up. The media have an indispensable role in the elections while the state fulfills its responsibility to protect journalists. The two institutions must not let the nation down”.

Another journalist who preferred to remain anonymous said:

“Journalists in Ghana have consistently come under brutal assault in the last five years. A lot of brutalities have happened in the past. In 2019, Hajia Fati a supporter of the ruling party, the NPP  assaulted a female journalist with Ghanaian Times, when the reporter was discharging her duties.Two years ago, a TV reporter, Godfred Tanam was assaulted by thugs of the ruling party while on official duty. In 2018 again, two journalists with the multimedia group, Latif Iddris and Kwesi Parker were assaulted by police officers at separate events while discharging their duties. Five years ago, while on an official assignment, my camera was collected from me at gun point. The serious thing is that, there will be general elections on 7 December and these brutalities are lingering and could even escalate considering the large number of attacks against journalists this year without prosecution.

The Constitution of Ghana recognizes media freedom and independence, thus  creating an obligation for power holders to protect them against any attempt to erode their freedom. In 2016, the UN Human Rights Council (HRC) adopted Resolution 33/2 on the Safety of Journalists, which sets out the steps states have to take to prevent violence against journalists, protect them from such attacks, and prosecute the perpetrators. During the last Universal periodic review (UPR) in March 2018, Ghana committed to adopting a law guaranteeing media freedom.

“Journalism is not a crime. Ghana must do more to guarantee the safety of journalists and other media practitioners and take measures to ensure flow information without risks for journalists. It is important to investigate all cases of attacks and prosecute suspected perpetrators to discourage new ones and give victims a remedy.

“Free medias are vital for democracy and specially during the coronavirus pandemic. Political actors, security forces and citizens should respect the independence of media and refrain from any act that compromises security of media.”

“To fulfil its obligations for free media and for a press enabling environment, Ghana must urgently adopt a press code that guarantees independence of medias and creates accountability for journalists security and media protection”