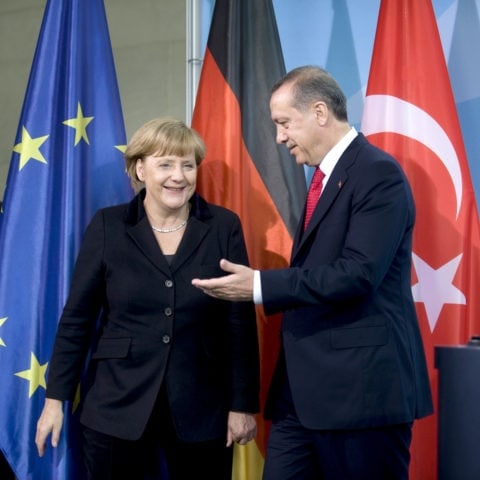 Recep Tayyip Erdogan, President of Turkey, and Angela Merkel, Chancellor of Germany, talk to each other at press call.

Today Angela Merkel okayed the prosecution of Jan Böhmermann, a German comedian, under an outdated provision of the German Criminal Code. Turkish President, Recep Tayyip Erdoğan, called for the comedian to be prosecuted for a poem that he read out during a television broadcast, making fun of the Turkish Head of State.

ARTICLE 19’s Head of Europe and Central Asia, Katie Morris commented that “it is wholly disproportionate and frankly absurd that this prosecution is going ahead. There is no justification to prosecute a comedian for reading a poem that is clearly a satirical take on anyone, let alone if the subject of the satire is a powerful and influential Head of State.”

“Erdoğan has repeatedly proved himself to be highly litigious and aggressive in his response to any criticism, so it is hardly suprising that he is seeking a prosecution in thus case. However it is of grave concern that Germany would legitimise his claim by launching a prosecution in such a ludicrous and groundless case. It sends a chilling message to artists and comedians everywhere.”

“EU States are playing a dangerous game of appeasement in bending to the whims of Erdoğan and we are unequivocal in our call for this prosecution to be dropped”, concluded Morris.

Böhmermann is now facing up to three years’ imprisonment under Section 103 of the German Criminal Code for insulting a Foreign Head of State.

European and International freedom of expression standards are clear that public figures, in particular heads of State, must show greater tolerance towards criticism than ordinary individuals. Laws that provide higher protection to the reputations of public figures than to others must be repealed.

As well as calling for the prosecution to be dropped, ARTICLE 19 calls on Germany to review its Criminal Code as a matter of urgency, and repeal this outdated provision.