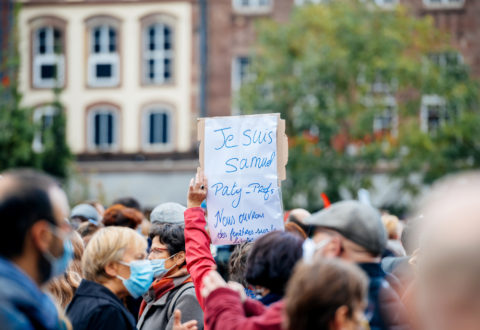 ARTICLE 19 condemns the horrific murder of teacher Samuel Paty in France on 16 October, and offers our condolences to his family. His murder for discussing the Charlie Hebdo trial and showing the images at the centre of the case in a classroom is a shocking attack on freedom of expression, and the vital role of educators in teaching students the critical thought that underpins free speech.

Samuel Paty, a history and geography teacher at a French school, had previously received threats after showing the Charlie Hebdo cartoons in a class on freedom of expression. He was murdered on his way home from work on 16 October. The attack comes as a trial takes place relating to the murder of 11 journalists and media workers of the Charlie Hebdo magazine in Paris in 2015. The attack then was motivated by the magazine’s publication of satirical cartoons of the Prophet Muhammad, a decision considered offensive by many, but which sparked a violent response from extremists who had targeted the magazine with threats previously.

“The murder of Samuel Paty is a deeply shocking attack on a beloved teacher, dedicated to helping his students develop critical thinking skills. We offer our sincere condolences to his family and colleagues.”

“Now is the time for the government of France to show what it means to respect freedom of expression.  We hope they will choose a path that respects international standards on expression and information in their response.”

Attacks like this, and like those witnessed against journalists and media workers at Charlie Hebdo, are not just an attack on the freedom of expression of those targeted, but can create a chilling effect, threatening media and academic freedom, and the ability of society to discuss vital issues of public interest. Attacks on freedom of expression, even expression many find offensive, create a broader threat to the ability of people to share their ideas and opinions and express dissent.