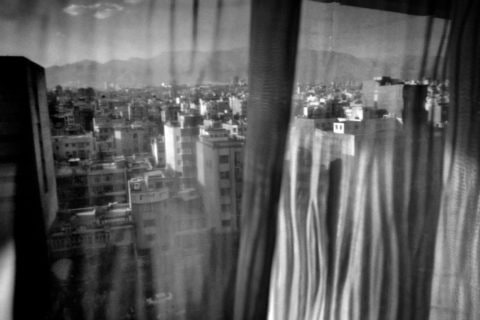 View over the Northern, more affluent, residential district of Tehran.

January 2015, I sat in a dimly lit cafe in central Berlin— a famous meeting spot for refugees in the city— and listened to a young Iranian human rights activist, feminist, and lawyer.

He recounted his hardships before arriving in Berlin. After being sentenced by the Iranian courts to four years imprisonment for his activism around Kurdish and women’s rights issues, he left Iran as soon as he was granted bail in 2010. When arrested in 2009, he had endured torture, interrogation, and solitary confinement for four months. He was 26 at the time.

5 years on, he’s in Berlin but, like many other Iranians forced into exile, he continues with his activism.

Deciding to continue with human rights work from outside Iran has proven to have its own unwelcoming barriers. We spent an hour discussing his needs and obstacles he faces while defending Iran from the outside. It’s challenging, to say the least.

Wanting to start a substantive project, he not only struggles with finding funding and understanding the procedures of starting a project, but is also faced with marginalisation by some human rights projects, due to not speaking English. From a Kurdish background, he explained why it is harder for Iranian ethnic minorities to become involved in human rights projects in the diaspora: “People who started to learn English in Iran can quickly adapt here [in Berlin] but I – someone who, whilst in Iran, did all I could to learn Farsi so that I could succeed – didn’t have the opportunity to learn English too.”

This activist’s story has many parallels with my interviews with 36 other human rights activists, scattered across 5 different countries. In this report by ARTICLE 19, a much required needs assessment was conducted with a broad spectrum of human rights defenders – Iran: Defending from the Outside. They have all suffered their own distinct difficulties, yet most of the issues raised in each interview to some degree echoed the needs and wants of other Iranian human rights defenders working in the diaspora: distinguishable patterns of obstacles have emerged.

Many of those interviewed left Iran after the post-election protests in 2009, some after the 1979 Iranian revolution, and a handful have never lived in Iran on a long-term basis. They all have one thing in common: they can no longer return to Iran. Due to this large exodus of Iranian human rights defenders, academics, lawyers, scholars, artists, journalists and intellectuals, much human rights work relating to Iran is done tirelessly by Iranians and organisations outside Iran.

Those human rights defenders (HRDs) who are forced to leave Iran often feel that they gradually lose their connections and support networks, and the authority and legitimacy which their activist status conferred upon them. This is a victory for the Iranian authorities who are using this method to successfully muzzle human rights activism relating to Iran, domestically and internationally.

Many institutions, governments and organisations provide assistance to these experts to support them in their work, but it became clear throughout the interviews that rarely are the voices of such a diverse group of activist heard, leaving many support gaps open, from psychosocial support to adequate feedback on failed proposals. In addition, many years of being sidelined and forced to fit into donor-driven criteria, packaging and watering down their ideas for the needs of human rights in Iran.

With so much expertise, and limited funds available, Iranian HRDs in the diaspora recognise the need to work together in order to address the gaps in their programmatic, research or funding needs. In order to do this, the hurdles they face need to be minimised, and their networks expanded and improved.

One interviewee, a prominent unionist and activist, who has endured one of the hardest and most painful experiences of imprisonment in Iran, concluded, “I hope something comes of this report. I hope our calls are listened to this time.”

We’re making sure they are: The Iran: Defending from the Outside report is a tool, a reference and a guide to how to help human rights defenders in Iran’s diaspora, sentenced to a life in exile. The process itself was an eye-opening experience, which has already changed the way we at ARTICLE 19 approach human rights work on Iran.

Many of these HRDs were silenced in Iran, we must not now fail to listen to them on the outside.

Read the full report: Defending from the Outside – A Needs Assessment of Iranian Human Rights Defenders in the Diaspora