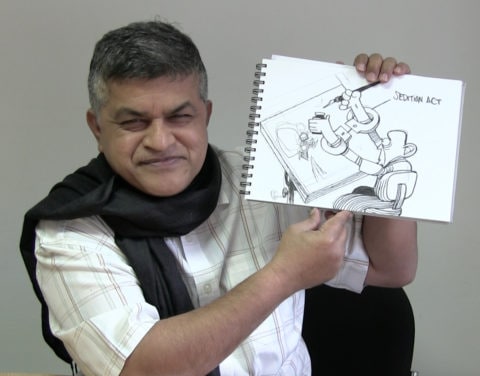 This week, cartoonist and political satirist Zunar spoke to ARTICLE 19 about politics, satire, and his upcoming trial, as well as drawing us an exclusive cartoon on the Sedition Act, under which he faces a record-breaking 9 charges.

2015 has been a tough year for Freedom of Expression – what lessons can we learn from this year?

I agree, this year has been a tough year for free expression – before this year, some people would say that only part of the world faces these challenges, but it is now clear that this challenge is everybody’s challenge.

It is important now for everybody to start to take part, to make sure that our freedom expression is guaranteed: public education and engagement are crucial. Reading the great activists, Ghandi, Martin Luther King, Mandela – I am inspired by them, but I feel we cannot leave them to fight for freedom alone- it is everybody’s job. Everybody must fight for freedom in their own way.

What is the future of political cartoon in Malaysia?

Cartoonists like myself, who criticize the government, become an Enemy of the State.

The corrupt regime does not know how to deal with cartoons- it is a special medium with unique quality, it can reach and engage with a wider audience, crossing racial and social divides. Cartoons can help people understand what has really happened: it’s very bad for the government, and very good for the people. A corrupt government is afraid of cartoons.

So is the culture of satire under threat in Malaysia?

Not at all- it has become more and more a part of civic life, being used in different ways. The best way to fight a corrupt government is laughter- there is no defence.

Recently a yellow balloon was thrown at the Prime Minister: yellow is the colour of protest in Malaysia – the people’s colour. That woman has been charged under the Sedition Act, but you can trust that if one person has done it, other people will do it again. This Halloween in Malaysia, somebody wore the mask of the Prime Minister’s wife; he has been detained too. There are a lot of very creative posters and videos and songs of protest online: it has really become a culture.

Satire is becoming a way of protesting in Malaysia: people can take part just by laughing at cartoons and at the government. You can lock up protesters but if you laugh at them, what can they do? There is no stopping it, because the problem is not that individual- the root of the issue is unhappiness with the government.

The risk is very high. I am facing 43 years, but this is how it is- we must carry on. One thing is for sure, there’s no way for us in Malaysia, as citizen or as cartoonist, to say ‘yes’ to the government, we have to say ‘no’.

Do you think Malaysia’s protest culture can survive these crackdowns?

Absolutely: the people know how much the Government cheat Malaysia. In the recent Bersih 4 protest, there were protesters who were young and professional, and there was a mix between the races, all coming out together. These are new faces.

What hope do you hold for Malaysia’s political future?

The future is bright, but you don’t know when the change will come. The change in Malaysia will be a change of government- we have been ruled by the same political party for more than 60 years.

Judiciary, police, education – it has all been politicized for this particular government to stay in power. Nobody even talks about how to fight corruption in Malaysia, because everybody, the whole Cabinet, are corrupt. When you are in government for too long, you become a regime. No regime will surrender. This is our reality in Malaysia. We are looking for total reform.

Is there any solidarity among political cartoonists around these issues?

Political cartoons in Malaysia are fairly new:  we don’t really have political cartoonists who want to criticize the Government. When you do, you become an enemy of the state. Very few cartoonists want to support me, the government owns the media, and their jobs would be at stake. I have a support from a young group of cartoonists in Malaysia- who draw for social media and are independent. In Malaysia, out of a 30 million population, we have more than 13 million internet users. Facebook and Twitter are not social media, they are alternative media—this is very dangerous for the government, but very good for the nation.

What are your predictions for your own case?

The system is corrupt, and we have very few independent judges. So, it is very difficult to win a politically-motivated case against the Malaysian government. It is as simple as that.

The Sedition Act has given so much power to the regime, they only need to declare an act as seditious, and they can detain people. It is a very powerful weapon, but it has also opened people’s eyes to the nature of the regime: why cartoonists? We are not violent – Why put us in jail?

I don’t put any hope in it, I think there is a very slim chance for me to win. But it is very important for me to stand trial: it forces the Government to justify itself. But it is about responsibility as an artist and as a human being- my talent is not a gift but a responsibility, on this philosophy I feel it is my responsibility to push for reform.

Record-Breaker on Trial: Who is Zunar?