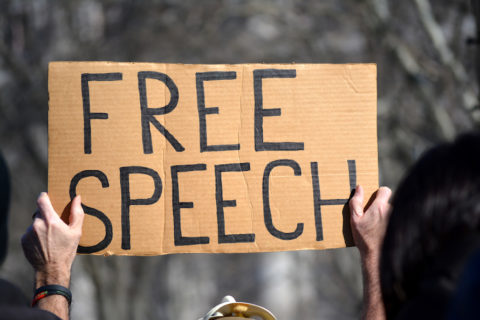 This week, the European Court of Human Rights (European Court) handed down judgment in two important cases on the protection of freedom of expression in national security cases. ARTICLE 19 intervened in both instances.

In the first case, Üçdağ v. Turkey, the European Court found a violation of the right to freedom of expression in the case of a criminal conviction for “disseminating propaganda in support of a terrorist organisation” regarding two posts published by Resul Üçdağ on his Facebook account in 2015. Üçdağ was a public official working as an imam at a local mosque at the time of posting. The posts included two photographs of individuals in uniform similar to that of Kurdistan Workers Party (PKK) members and of a crowd demonstrating in a public street in front of a fire. They had originally been shared by two other Facebook users. The PKK has been designated a terrorist organisation by multiple countries, including Turkey, the United States, and by the EU.

The European Court ruled that the domestic courts had failed to provide sufficient reasons as to why the posts condoned, praised or encouraged the methods of coercion, violence or threats used by the PKK in the context of their publication (para.85). In convicting Mr Üçdağ on charges of propaganda in favour of a terrorist organisation for having shared the controversial posts on his Facebook account, the domestic courts had also failed to conduct an appropriate balancing exercise, in line with the criteria set out in the European Court’s case-law, between the applicant’s right to freedom of expression and the legitimate aims pursued.

ARTICLE 19, which intervened with Turkish freedom of expression group IFOD, welcomes the decision in the case. The Court followed our argument that the domestic courts were required to follow the Court’s case law in determining whether the posts at issue amount to incitement to violence. At the same time, the Court eschewed a more detailed and substantive analysis of the Facebook posts, including: the nature of the images and comment, whether the applicant was well known, the extent to which the platform used was open or semi-private, whether the applicant’s posts had been widely viewed and the likelihood of violence occurring as a result of those posts.

The European Court’s decision is in stark contrast with today’s ruling in Z.B. v. France concerning a joke about terrorist acts. Z.B. was convicted for ‘glorification of wilful killing’ in connection with a T-shirt that read ‘I am a bomb’ and ‘Jihad, born on 11 September’. He had given the T-shirt to his nephew as a present for his third birthday. The boy — named Jihad and born on 11 September — had then worn the T-shirt to nursery school. The inscriptions had been noticed by the headteacher and another adult after the child went to the toilet.

The Court reiterated that humorous speech was protected by Article 10 of the Convention, but it held that the right to humour was not unlimited and anyone relying on the right to freedom of expression had to assume ‘duties and responsibilities’. Even though over 11 years had elapsed since the events of 11 September 2001, the Court attached great weight to the fact that, shortly before the events at issue in the case, there had been other terrorist attacks, which had caused the death of three children in a school. For the Court, the fact that the applicant had no links with a terrorist group and had not espoused a terrorist ideology could not detract from the significance of the offending message. The three-year-old, as the unwitting bearer of the message, had been instrumentalised. The Court concluded that the reasons given by the domestic courts to convict the applicant, relying on the need to prevent glorification of mass violence, were both ‘relevant’ and ‘sufficient’ to justify the interference in question. Moreover, the sanction imposed on the applicant (EUR 4,000 fine and suspended prison sentence) had not been disproportionate to the legitimate aim pursued. Accordingly, the interference with the applicant’s right to freedom of expression was necessary in a democratic society and there had been no violation of Article 10 of the Convention.

ARTICLE 19 is disappointed with the European Court’s decision. Although the European Court often repeats that the right to humour is protected under the Convention, it consistently fails to uphold it in practice when examining jokes in bad taste or that it considers to be overly offensive (see e.g. M’Bala M’bala v France, 2015). The Court also consistently fails to heed international standards on freedom of expression according to which the mere ‘praise’, ‘glorification’ or ‘support’ of violence or terrorism are overly vague legal standards that are bound to capture expression that ought not to be criminalised. Instead, the appropriate standard should be one of ‘incitement’. In this instance, it is clear that the inscriptions on the child’s T-shirt were unlikely to incite violence. The Court itself noted that they had only been seen by two adults. It is also striking that the Court considered that a criminal sanction, including a EUR 4000 fine and suspended sentence, was both proportionate and justified in the circumstances.

Ultimately, the Court’s decision underlies the difficulty in attempting humour in the context of terrorism cases and the Court’s unwillingness to challenge domestic authorities’ decisions in these kinds of cases. The contrast with the Court’s approach in Turkey is also noteworthy.