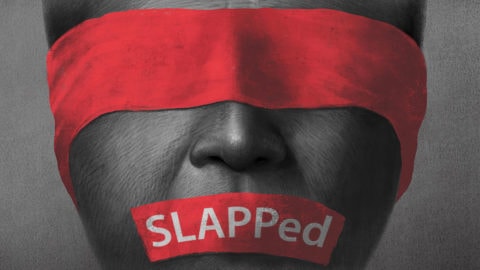 Ahead of the launch of the European Democracy Action Plan (EDAP), Article 19 and 60 partners today endorse the Model EU Anti-SLAPP Directive.

This paper was drafted at the initiative of a coalition of non-governmental organisations from across Europe that have been working together over the past years to raise awareness and urge policy makers to protect public watchdogs such as journalists, rights defenders, activists and whistleblowers from Strategic Lawsuits Against Public Participation (SLAPPs).[1]

SLAPP suits are a form of legal harassment. Pursued by law firms on behalf of powerful individuals and organisations who seek to avoid public scrutiny, their aim is to drain the target’s financial and psychological resources and chill critical voices to the detriment of public participation.

Currently, no EU member state has enacted targeted rules that specifically shield against SLAPP suits. EU-wide rules providing for strong and consistent protection against SLAPP suits would mark a crucial step forward towards ending this abusive practice in EU member states and serve as a benchmark for countries in the rest of Europe and beyond. Together with other legislative and non-legislative measures, it would contribute to secure a safer environment for public watchdogs and public participation in the EU.

This is why civil society has engaged a wide range of experts including academics, lawyers, practitioners, SLAPP victims and policy and advocacy specialists, to look into the value added, the feasibility and the key components of possible EU anti-SLAPP legislation. This paper is the result of this collaborative work[2]: a model EU anti-SLAPP legislation proposing a set of rules which, if in place, would make sure that in each EU country SLAPPs are dismissed at an early stage of proceedings, SLAPP litigants pay for abusing the law and the courts, and SLAPP targets are given means and assistance to defend themselves.

As democracy and the rule of law come increasingly under pressure in a number of member states, this paper supports the call on EU policymakers by the undersigned organisations to urgently put forward an EU anti-SLAPP Directive to protect public watchdogs that help hold the powerful to account and keep the democratic debate alive.

[1] The initiative was financially supported by Article 19, the Civil Liberties Union for Europe, the Committee to Protect Journalists, the European Centre for Press and Media Freedom, the European Federation of Journalists, Free Press Unlimited, Greenpeace European Unit, the International Press Institute, NGO Shipbreaking Platform, Pen International and Reporters Without Borders.

[2] This paper was authored by an expert working group composed of dr. Linda Maria Ravo, expert consultant to the Civil Liberties Union for Europe (Lead Author and Principal Investigator), dr. Justin Borg-Barthet, Senior Lecturer, Centre for Private International Law, University of Aberdeen (Co-Investigator) and Prof. dr. Xandra Kramer, professor at Erasmus School of Law,Erasmus University Rotterdam and at the Faculty of Law, Economics and Governance of Utrecht University (Co-Investigator). The authors are thankful to specialist practitioners and scholars who acted as peer reviewers of the text. The usual disclaimer applies.