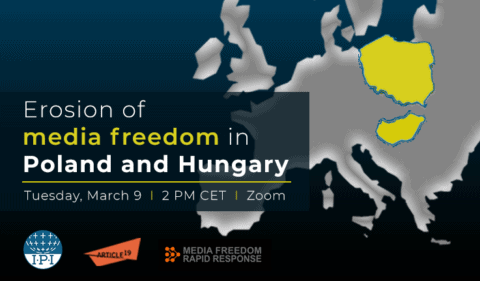 On Tuesday 9 March, the International Press Institute (IPI) and ARTICLE 19 are hosting a high-level panel event to discuss the erosion of media freedom and pluralism in Poland and Hungary and its effect on democracy within the European Union.

The online event is being held one day ahead of a major debate in the European Parliament on March 10 that will focus on the attempt by governments in Poland and in Hungary to silence free media.

During the webinar, speakers will discuss the ongoing efforts by the ruling parties in Budapest and Warsaw to dismantle media pluralism and highlight how the model for media capture and control developed by the Fidesz government has been exported to other EU member states in recent years.

The speakers will also discuss the findings of recent international press freedom mission to Poland held by IPI and its partners in the Media Freedom Rapid Response (MFRR), and how the Orbán government’s model for suppressing independent media has been replicated and refined.

Erosion of media freedom in Poland and Hungary