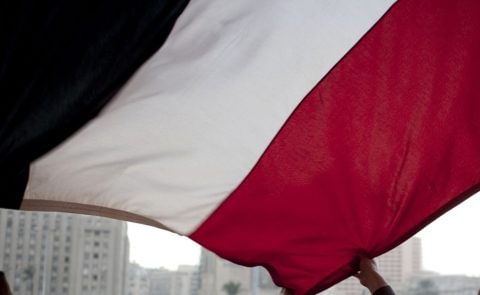 Protesters carrying an Egyptian flag in Tahrir Square. 25 January 2011 saw the beginning of a non-violent 18 day protest movement that eventually ended the 30-year rule of Hosni Mubarak and his National Democratic Party.

In recent weeks, the Egyptian authorities have summoned human rights workers for questioning, banned them from travel and attempted to freeze their personal funds and family assets. These steps indicate that a five-year-old investigation into the funding and registration of independent human rights groups could soon result in criminal charges, 14 international organizations said today.

The authorities should halt their persecution of these groups and drop the investigation, which could threaten human rights defenders with up to 25 years in prison, the organizations said.

“Egypt’s civil society is being treated like an enemy of the state, rather than a partner for reform and progress,” said Said Boumedouha, Deputy Director of Amnesty International’s Middle East and North Africa Programme.

The investigation into the funding of local and foreign groups began in July 2011, five months after the toppling of former president Hosni Mubarak, and has already led to convictions and the closure of the Egypt offices of five international nongovernmental organizations. It is currently being conducted by a panel of three judges chosen by the Cairo Court of Appeals at the request of the Justice Ministry.

Under Egyptian law, prosecutors could charge leading human rights defenders for working without official registration or accepting foreign funding without government authorization. An amendment to the penal code passed in September 2014 by President Abdel Fattah al-Sisi provides for a sentence of up to life imprisonment (which equates to 25 years in prison in Egypt) for the latter charge.

The crackdown on Egypt’s human rights defenders has gathered pace in recent months. On March 22, 2016, Mozn Hassan, founder and director of Nazra for Feminist Studies, was summoned for questioning as a defendant in the foreign funding case. She is due to appear before the investigating judges on March 29, 2016.

On March 19, a Cairo criminal court heard a request from the investigating judges to freeze the assets of Hossam Bahgat, a journalist and founder of the Egyptian Initiative for Personal Rights who currently writes for the Egyptian news website Mada Masr, and Gamal Eid, a lawyer and the director of the Arab Network for Human Rights Information. The judges’ request also extended to the assets of Eid’s wife and 11-year-old daughter. The court postponed the hearing to March 24, and on March 21, the investigating judges also imposed a gag order preventing local media from reporting on the case.

A Cairo criminal court had already issued an order in February, at the investigating judges’ request, to bar Bahgat and Eid from travelling outside Egypt.

Courts, prosecutors and security agencies have barred at least 10 human rights activists from travel in recent weeks, including Mohamed Lotfy, director of the Egyptian Commission for Rights and Freedoms, and four employees of the Egyptian Democratic Academy.

Between March 13 and 15, three employees of Nazra for Feminist Studies, two employees of the Cairo Institute for Human Rights Studies, and one employee of the United Group, a law firm that has published reports on torture, were asked to appear before the investigating judges for questioning. The summoned employees included finance officers from each group.

Previously, on March 3, an investigating judge had interrogated the director of the United Group, the lawyer Negad al-Borei, on the allegation of establishing an unlicensed entity and “pressuring” the president to issue an anti-torture law.

In February, following an investigation, government tax authorities demanded that some of the independent groups under investigation pay several million Egyptian pounds in back taxes. On February 17, Health Ministry officials also issued an order to close the Nadeem Center for the Rehabilitation of Victims of Violence and Torture, Egypt’s leading center for such treatment, on the basis that it was performing unlicensed work. The Center has been licensed as a medical clinic since 1993 and has provided hundreds of torture victims with vital services, including counselling and legal assistance.

The first phase of the investigation into independent groups’ funding—known as case 173 of 2011—concluded in June 2013 when a Cairo criminal court sentenced 43 foreign and Egyptian employees of five international organizations to between one and five years in prison, on charges of operating unlawfully in the country and receiving foreign funding without permission.

Following the conclusion of the first investigation into international groups, the authorities turned their attention to local organizations.

The three investigating judges resumed their work in 2014, when the Social Solidarity Ministry gave local groups an ultimatum to register under an onerous associations law dating to Hosni Mubarak’s presidency. The law empowers the government to shut down any group virtually at will, freeze its assets, confiscate its property and reject nominees to its governing board.

Many of the targeted groups are licensed in some fashion, including as non-profit groups, law firms or medical clinics. Still, some have relocated their staff outside Egypt or curtailed their operations rather than register under the Mubarak-era law. But even registered groups have not escaped investigation: The Egyptian Democratic Academy had successfully registered in January 2015, and Nazra for Feminist Studies has been registered since 2007.

Both the National Security branch of the Interior Ministry and the General Intelligence Service, Egypt’s external spy agency, have been gathering information on local groups’ activities for some time. Their findings were contained in a September 2011 fact-finding report, parts of which were leaked to the media, that named 37 groups under investigation, including all of those affected by the recent summonses and travel bans.

Calls on the Egyptian authorities

The Egyptian authorities should withdraw the order to close the Nadeem Center and lift all travel bans and asset freezes against human rights workers, whose activities are protected by Egypt’s constitution and international law, the organizations said.

The authorities should also lift the gag order, which prohibits media outlets from publishing anything on the case other than statements issued by the presiding judges until the investigations are complete. This violates the right to freedom of expression, enshrined in Egypt’s constitution and international law.

Egypt should abide by its March 2015 pledge at the conclusion of its Universal Periodic Review before the United Nations Human Rights Council to “respect the free exercise of the associations defending human rights.” This should include allowing groups to register under a new associations law that parliament should draft following consultation with independent groups, and which should abide by article 75 of the constitution, which protects groups from interference by the government. The law should comply with international standards on freedom of association.

The Human Rights Council and its member states should condemn the current crackdown and demand concrete measures to improve respect for fundamental human rights.

“Instead of shutting down the last vestiges of civil society, Egypt should welcome scrutiny of its human rights record and take on board the constructive criticisms of local NGOs. The authorities should engage in an open and genuine dialogue with its rights movement,” said Michel Tubiana, President of EuroMed Rights.

The organisations expressing concern are: