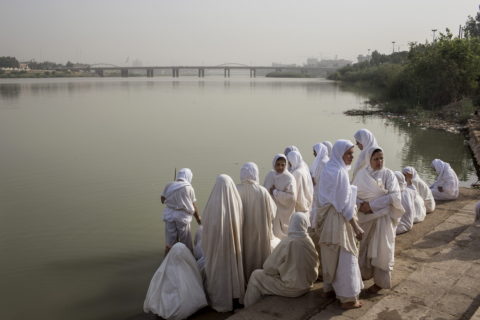 Female members of the ancient Sabaean Mandean religious sect preform a ritual cleansing during an annual baptism held on the banks of the Karoun River. Water is everything to the Sabaean Mandeans who are baptised in it, get married in it and receive their last rites by the river's edge.

Iranian government has repeatedly announced that freedom of expression is one of the civil rights granted to each Iranian, and that the ethnic minorities of Iran are not deprived of this right. According to Iranian government officials, there are cultural NGOs and cultural activities in Iran, where each Iranian citizen can freely promote and teach his/her own culture and language. But the Iranian government has repeatedly violated these laws, depriving Iran’s Arab speaking people from rights granted under Article 19 of the Universal Declaration of Human Rights: that is, the freedom of expression. Meanwhile, many cultural and political activists, as well as supporters of freedom of expression, have been arrested on charges of acting against national security and insulting religious sanctities, with a large number of these activists being sentenced to death.

In February 2011, Habibollah Rashedi, born in 1971 in city of Khalifa in the vicinity of Ahwaz (southern Iran), who was former member of the city council of Khalifa, was arrested with the majority of the founding members of the Alhavar Cultural Institute.

Habibollah Rashedi recalled that the security forces tortured them physically and mentally in secret locations [secret detention centres belonging to Iran’s Intelligence Ministry]. Habibollah Rashedi had in fact infuriated the security forces through his cultural activities and by expressing his views on the necessity of preserving the Arabic culture for Arab people in Ahwaz. He had been arrested several times by these forces for expressing his opinions and views regarding for the absolute freedom to preserve the Arabic culture of the region. But in February 2011, security forces raided the home of former member of the city council, and arrested him along with a number the founding members of Alhavar Cultural Institute.

Habibollah Rashedi announced in that interview that he has been victimised for expressing his opinions, and that during Hashem Shaabani’s arrest in January 12, 2011, he couldn not inform human rights organisations outside Iran about his arrest as he was not given internet access. More than 2 weeks after Hashem’s arrest, Habibollah Rashedi and his brother Hadi Rashedi were also detained in their own home.

Arab people in Iran live in fear of the police and security forces, and this atmosphere has deprived people from expressing their fundamental opinions and views. In recent years, especially after Ahmadinejad’s government took office, these crackdowns have intensified, and a large number of political and cultural activists have faced the death penalty, imprisonment and torture, as well as some being forced into exile. With election of Hassan Rohani [to presidency], the conditions of free expression have not improved, but worsened, where the sentences of those activists who were condemned to death during Ahmadinejad’s presidency have been upheld and implemented during the ‘moderate’ government of Rohani.

At the end of this interview, Mr. Habibollah Rashedi said: ‘for Arab people in Ahwaz, freedom of expression is like a fictional story about which they have just heard, but they have always been deprived of this blessing’. Political and cultural activists in this region have never been safe, and security forces have had perfect manoeuvrability to confront these activists and other proponents of freedom of expression.

These activists are severely tortured in detention centres, both physically and mentally, in a manner that has left many of them with ongoing mental and physical issues even after their release.

I will never forget the name and memory of my friend and brother, Hadi Rashedi, who was a cultural activist and one of the founding members of the Alhavar Cultural Institute. He was one of the victims deprived the essential right to free expression, being arrested by the security forces and later executed secretly along with Hashem Shaabani.

Kamil Alboshoka is a Human Rights activist studying MA in Human Rights law. He migrated to the UK in 2006 for political asylum, and has since began work as an activist outside Iran. He currently writes about human rights violations in Ahwaz. When he lived in Ahwaz, he  worked with his friends at the Alhewar Cultural Organisation, whose two founders have since been executed (in 2014).