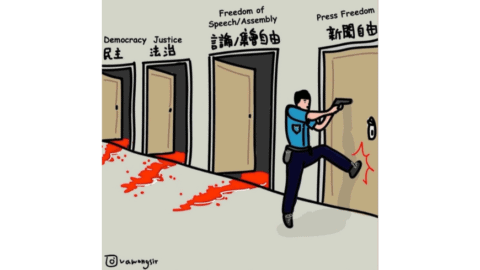 Over the past year, Chinese and Hong Kong authorities have wielded the National Security Law as an instrument to transform a freer society into the authoritarian model preferred by Beijing. Censorship and propaganda, political terror, and attacks on independent media are the new reality in Hong Kong.

It is a blueprint for authoritarianism.

In September 2020, seven UN Human Rights Special Procedures issued a joint communication in which they expressed concern over the threat the NSL posed to the rights to freedom of opinion, expression, and of peaceful assembly.

The NSL calls on authorities to strengthen the ‘supervision and regulation’ of ‘schools, universities, social organizations, the media, and the internet.’ Since its imposition, it has been used to justify sweeping restrictions on freedom of expression and access to information across institutions, to interfere with freedom of opinion, and to terrorize and arrest scores of Hong Kongers.

At schools and universities, education secretary Kevin Yeung has declared that ‘no one, including students, should play, sing and broadcast songs which contain political messages or hold any activities to express their political stance.’ Students are banned from singing or playing music related to the pro-democracy anthem ‘Glory to Hong Kong’.

Pro-China ‘patriotic education’ has been enforced, while several schools have established task forces to monitor and report on teachers’ behaviour both in and outside the classroom for suspected violations of the NSL.

Administrators at the University of Hong Kong have instructed teaching faculty to avoid ‘discussion on sensitive issues,’ and expressed ‘zero-tolerance against politics or personal political views brought into classrooms.’ Critical professors, like Benny Tai, have been sacked.

In early July 2020, the Education Bureau instructed schools to remove any books from their libraries that would violate the NSL. Public libraries and bookstores in Hong Kong have removed from circulation at least 34 books, such as those written by political figures including Joshua Wong or books that refer to Hong Kong as a ‘city-state’. At least six book publishers have censored textbooks to remove content on civil resistance or the phrase ‘separation of powers’ in a move decried by the Hong Kong Professional Teachers’ Union as ‘political censorship’.

Other forms of cultural expression have also been targeted. The Hong Kong Arts Development Council has stated it would cut grants for artists who violate the NSL. M+, an art museum meant to open later this year, said in March 2021 that it will not show a photograph by dissident artist Ai Weiwei following pressure from authorities. Also in March, two sold-out screenings of a documentary about the 2019 pro-democracy movement were abruptly cancelled following the publication of pro-Beijing editorials accusing the organisers of subversion. And in June 2021, Hong Kong authorities announced overbroad amendments under the Film Censorship Ordinance to ban films that may endanger national security or may be ‘perceived as endorsing, supporting, promoting, glorifying, encouraging or inciting such act or activity.’

The slogan ‘Liberate Hong Kong, Revolution of Our Time’ has been banned and anyone chanting or displaying its image risks arrest under the NSL.

The broadcaster Radio Television Hong Kong (RTHK) has faced increasing censorship and control. In March 2021, a new director, Patrick Li, imposed a number of repressive new policies requiring his prior approval for broadcast content and fines on employees whose programs are deemed to violate the NSL. A number of programs have been axed. In May 2021, RTHK confirmed that it was removing hundreds of old videos from YouTube and Facebook, and in late June two popular political talk shows were abruptly terminated. Right before the NSL came into effect, RTHK suspended the political satire Headliner, on air since 1989, following an episode making fun of the Hong Kong police. Meanwhile, since April 2021, RTHK has begun broadcasting a program hosted by Hong Kong Chief Executive Carrie Lam four times a day.

Tragically, Apple Daily, one of Hong Kong’s last independent media houses, in print since 1995, was forced to shut down this month. Its owner and seven senior staff members have been arrested on spurious charges of foreign collusion under the NSL.

Following the forced shuttering of Apple Daily, the Hong Kong Journalist Association warned of greater self-censorship among local media. And on 28 June, Stand News, another pro-democracy online news outlet, announced that it would cull opinion pieces and commentary from its website and stop accepting donations. Six of its directors, including former pro-democracy legislator Margaret Ng and activist singer Denise Ho, stepped down on company advice to reduce risks.

Self-censorship has been stifling. As the NSL came into force, countless Hong Kongers deleted social media posts and shut down accounts out of fear that their content could be used against them under the law’s vague offences. Now, a year later, another dark wave of self-censorship is sweeping Hong Kong. In late June 2021, the Facebook page for pro-democracy legislator Anges Chow, who was released from prison on 12 June, went offline without explanation, while visual artist Justin Wong Chiu-tat acknowledged that he was deleting his Facebook page.

In November 2020, in an Orwellian escalation turning neighbours into informants, Hong Kong police launched a hotline encouraging residents to report suspected violations of the NSL and received some 1,000 tips within the first hour. In June 2021, a Hong Kong man was arrested merely for displaying a flag with the banned protest slogan on his apartment balcony after a passer-by reported him.

According to the Georgetown University Centre for Asian Law, at least 24 of the first 113 arrests under the NSL were for ‘seditious’ or ‘secessionist’ political speech, or possession of such material. The UK-based Hong Kong Watch reports that at least 10,000 people have been arrested, with some 2,300 charged, for participation in the 2019 pro-democracy demonstrations, a number of them elected politicians.

Some of those arrested have been held without bail, including pro-democracy legislator Joshua Wong. At least one activist, Andy Li, was forcibly committed to a psychiatric facility despite having no history of mental illness. Tam Tak-chi, vice-chairman of the pro-democracy People Power Party, has been held since September 2020 in prolonged solitary confinement, which the UN considers a form of torture. In early June 2021, the first trial under the NSL began. Tong Ying-kit, who has been denied a trial by jury, is charged with secession and terrorism in part for carrying a ‘Liberate Hong Kong’ banner. He faces life in prison if convicted.

In August 2020, over 200 Hong Kong police raided Apple Daily’s office and arrested its owner Jimmy Lai. Denied bail, in April 2021 he was sentenced to 14 months imprisonment over his support of the 2019 pro-democracy movement. This month, Lai was informed that he would face an additional trial in July for violations under the NSL.

Apple Daily’s office was raided again on 17 June 2021, by some 500 officers this time. Hong Kong police froze Apple Daily assets. Five senior executives were arrested on suspicion of colluding with foreign forces over articles dating back to 2019. Despite official assurances last year, the NSL has been applied retroactively against Apple Daily. A week later, Hong Kong’s police commissioner lashed out at ‘fake news’ in general and specifically noted that the investigation into Apple Daily would involve more arrests. And on 28 June, Hong Kong police arrested a seventh former senior Apple Daily journalist at the airport while he attempted to leave the city, reportedly for the UK.

It is furthermore alarming that anyone, anywhere in the world can be charged under the NSL, raising the risk of extradition to Hong Kong or China. In July 2020, a Hong Kong court issued arrest warrants for Nathan Law and five other pro-democracy activists who had fled the city. In January 2021, an arrest warrant was issued for former legislator Ted Hui, now in London. Hong Kong authorities have reportedly contemplated warrants for two Danish politicians who assisted in Hui’s flight, a move called ‘deeply disturbing’ in a European Parliament Resolution in January.

In their September 2020 joint communication on the NSL, seven UN Special Procedures stressed that ‘security and human rights are intertwined.’ They reiterated that although some rights, such as the freedom of movement, expression or peaceful assembly, may be restricted under limited circumstances, citing national security does not give absolute discretion to the State. Under international law, the rights to freedom of expression and information may only be restricted if prescribed by law, in pursuit of a legitimate aim, and necessary and proportionate to that aim, while also being the least restrictive means possible.

The Special Procedures held that the NSL lacked precision and did not appear to meet the ‘required thresholds of necessity, proportionality and non-discrimination under international law.’

The UN Human Rights Committee, in its General Comment 34, explains that even in a state of emergency no exception or restriction is permitted regarding the right of everyone ‘to hold opinions without interference,’ and that no one may be harassed, intimidated, arrested, or imprisoned on the basis of their opinions, including those of a political or historical nature.

General Comment 34, also emphasises that it is impermissible to invoke national security laws ‘to suppress or withhold information of legitimate public interest or to prosecute journalists, researchers, human rights defenders, or others, for having disseminated such information.’

The Johannesburg Principles on National Security, Freedom of Expression and Access to Information holds that anyone accused of a national security-related crime, especially involving expression or information, is entitled to all rule of law protections under international law. These include the presumption of innocence, right to prompt access to counsel of choice, and a fair and public trial by an independent and impartial court—including a trial by jury.

These norms have been brazenly discarded by China and Hong Kong authorities under the NSL.

Since 2017, Beijing has made clear that it does not consider itself bound by its obligations under the Sino-British Joint Declaration on Hong Kong, which would have preserved autonomy and civil and political rights in Hong Kong until at least 2047. The repressive implementation of the NSL and Beijing’s despotic siege of Hong Kong are chilling reminders of the threats to international human rights norms posed by a rising China.