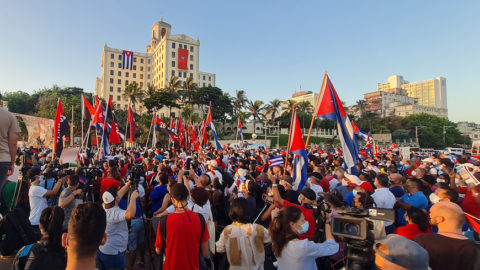 ARTICLE 19, CIVICUS and the Institute on Race, Equality and Human Rights issued this statement during the Item 4 General Debate at the 48th Session of the UN Human Rights Council.

We remain critically concerned with the unfolding human rights crisis in Cuba. The situation demands the urgent attention of the Council.

In July, a series of nationwide protests in response to the COVID-19 emergency, grave shortages of basic goods, and widespread violations of human rights were met with arbitrary detentions, enforced disappearances, and the unlawful use of force. The Cuban State deployed an elite unit of the Revolutionary Armed Forces, also known as the “black berets”, to suppress the protests.

More than 900 people, including minors, have been detained or have disappeared in the context of these protests, of which 443 remain deprived of their liberty. This includes political leaders, journalists and media workers, human rights defenders and artists.

The protests were also met with frequent and extended Internet shutdowns, denying the free flow of information and facilitating gross human rights violations, in flagrant violation of multiple UN resolutions.

Cuba has recently passed Decree Law 35 and Ministry of Communications Resolution 105, which criminalise efforts to organise protests online, as well as deny the right to freedom of expression on overboard and vague grounds. This forms part of a deeply repressive legal architecture that criminalises dissent.

The UN High Commissioner for Human Rights, as well as the Inter-American Commission on Human Rights, have now raised their serious concerns about the rapidly deteriorating human rights situation in Cuba.

We urge all States to vocally condemn human rights violations in Cuba, and call on the Council to establish a monitoring mechanism to further accountability for the human rights crisis in Cuba. We also urge the Cuban authorities to immediately and unconditionally release all those arbitrarily detained in connection with the July protests, including political leaders, journalists and media workers, human rights defenders and artists.