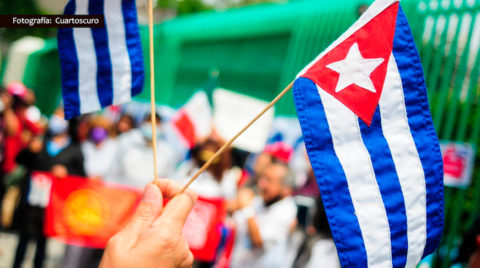 Tuesday 13 July 2021- The undersigned organisations condemn the Cuban government’s repression of the citizen protests, which begun on 11 July 2021 and which continue to date. We also urgently call on the administration presided over by Miguel Díaz-Canel to stop all acts of violence and violations of citizens’ human rights through the use of force, police repression, and calls for confrontation between Cubans.

Cuba is going through a profound healthcare, economic and political crisis. On Sunday, 11 July and Monday,  12 July, protesters took to the streets in protest against the government about the lack of individual freedoms, the insufficient medical services to deal with the COVID-19 pandemic, the havoc wreaked on families’ economic situation caused by the monetary order, food shortages, power cuts, and the recurrent violence by the security forces against any expression of discontent from citizens. Mass mobilisations occurred in at least 58 different locations.

In response to the demonstrations, arbitrary detentions and physical attacks against peaceful protesters, including university students, were carried out by the National Revolutionary Police, the Riot Squads, and the Department of State Security. Héctor Valdés Cocho, Luz Escobar, Tania Bruguera, and Kirenia Yalit Nuñez are among those targeted. Independent journalists and activists denounced security patrols near their homes to prohibit them from going out onto the streets, a practice that the Cuban authorities have previously adopted as a tactic of intimidation. It is notable that international civil society organisations, activists, and journalists present at demonstrations or following them remotely reported blocked Internet service and social media platforms. Facebook, Twitter, and instant messaging applications were also reported down on 12 July.

For his part, President Miguel Díaz-Canel called on supporters of the ruling party to take to the streets to confront the protesters, a clear incitement to violence: “That is why we are calling on all revolutionaries in our country, all communists, to take to the streets in any of the places where these provocations are going to take place today, from now on and throughout these days”.

Following this message, pro-Cuban government groups came out to attack and beat the demonstrators.

Among the violations registered by human rights organisations, the following stand out: acts against the physical and psychological integrity of individuals, legal security, the right to assembly, freedom of expression, access to information, personal freedom, and the right to defend human rights. To date, several of the signatory organisations have registered dozens of people detained and/or disappeared at the hands of the National Revolutionary Police and State Security agents, including minors; these organisations report there have been hundreds of detentions. A definite figure has not been determined due to the internet service outages in the country, meaning that in a number of areas those who have faced violations have not been able to communicate this.

It is important to note that journalists covering the demonstration have been assaulted, including the Associated Press (AP) photojournalist Ramón Espinosa. Others, whose information is being documented, have not been located, including the director of Hora de Cuba, Henry Constantín, Iris Mariño García, Neife Rigau and Orelvys Cabrera Sotolongo, Rolando Rodríguez Lobaina, Niober García, or were detained, including the director of Tremenda Nota, Maykel González Vivero. In addition, the arbitrary detention of journalist Camila Acosta, the Cuban correspondent of the Spanish daily ABC and who also contributes to Cubanet News, was also registered on 12 July.

The undersigned organisations have registered the growing social unrest that the lack of openness to dialogue, the punitive spirit of the Cuban authorities in their interaction with citizens, and the constant harassment of civil society and independent media have provoked. In this context, the Cuban government has accused activists and journalists of being part of a destabilisation plan aimed at undermining the legitimacy of the demands expressed in the various protests both today and in years gone by.

We, therefore call on the Cuban government headed by Miguel Díaz Canel to refrain from further violating the rights of critics, inciting confrontation and violence with those whose positions differ from the official one, and to guarantee the integrity of people who are legitimately exercising their right to demonstrate.

In addition, we once again call on the international community, especially the embassies of the European Union and the special rapporteurs of the Inter-American Commission on Human Rights (IACHR) and the United Nations (UN), as well as the UN High Commissioner for Human Rights Michelle Bachelet to speak out in favour of the rights of Cuban citizens, and to call for democratisation through genuine dialogue as the only way to bring about change in the country.