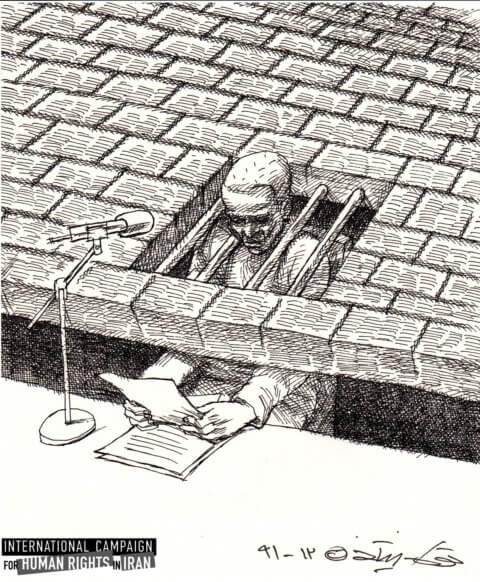 The last seven days have seen the unravelling of partially shrouded tensions between the powers that be in Iran. On the 18th May Leila Hatami – one of Iranian cinema’s most recognisable faces, after her part in the Oscar winning film A Separation – gathered much debate when she was greeted by Gilles Jacob, with a kiss on the cheek, at the Cannes Festival. Although the condemnation of the ‘incident’ can be seen as over played and exaggerated, it needs to be taken in context with past aggression towards Iranian actresses and actors  that have acted in a manner deemed contrary to the Islamic Republic’s morals. For example, in 2011 Marzieh Vafamehr was detained with 90 lashes for her role in the Australian film Tehran For Sale, where she appeared without a headscarf in several shots – she was released a few months later. Many similar stories have occurred in Iran adding to tense atmosphere for Iranian artists; especially women who are faced with heavy-handed policing by the morality police. Thus, anxiety arose due to the negative reactions Hatami received from Iranians officials following her greeting with Gilles Jacob: Iran’s Deputy Culture Minister Hossein Noushabadi criticised Hatami’s actions, saying it undermined the image of chastity and was “in violation of religious beliefs”. No news has been received on whether the event will lead to her arrest or not. However, one would think that under Leila Hatami’s international status she may be shielded. The fact that Leila Hatami was the first Iranian woman in the main jury at Cannes Film Festival is a big step for Iran, thus it seems unlikely that Hamati will receive severe punishment (one would hope) in a period where the Iranian image on the international stage is becoming more and more important. It is, nonetheless, disheartening that an innocent kiss on the cheek could lead to such political discussions in the first place. Iranian actor, Bahram Radan, succinctly summed up the absurdity of this: “We are a country that takes a small kiss from 4,000 kilometres away, to our parliament”.

Later in the week news spread like wildfire about the undue arrest of 6 young Iranians who made a fan video of Pharrell William’s ‘Happy’. Just as you thought the Oscar nominated song had reached its optimal success in the world, the song led to what can be seen as a push by the Iranian youth to challenge the boundaries set around them; an act of rebellion. Making a video in Iran where men and woman dance in close proximity, are touching and where women are without their headscarves, is a bold move; especially in recent months where political tentions between reformists and hardliners are running high.

The group of dancers were arrested on Tuesday and forced to repent.  A concerning video was aired on Iran’s national TV of what was an obvious forced confession from the young Iranians. In the video Tehran’s police chief described their YouTube video as an obnoxious, warning others from getting involved in such acts.  A typical narrative was used in a similar fashion as past confessions aired on Iranian television. They were talking to a state interviewer with their backs to camera about being tricked into making the video. The use of such confessions are far too commonly used and misrepresented as interviews in Iran. Reports of similar confessions have been widely recorded and documented (for example here and here), leading to just another hurdle for Iranians who wish to freely express themselves.

It seems that the not-so-happy Iranians have now been released on bail awaiting trail, excluding the director. There has been no official confirmation yet. Reports showing their terrible ordeal and the abuse they suffered at the hands of the security forces prior to their confessions have also been published. International Campaign for Human Rights in Iran has said the defendants were likely to be charged with “promotion of immoral acts” and “distribution of images disturbing public chastity.”

The Happy video has shown the rift between hardliners and the reformists. After the arrests, all eyes were on President Rouhani to defend these young dancers in their quest to demonstrate happiness in Iran – the same message Rouhani has been trying to convey, albeit using a very different method. Rouhani has shown his disapproval through his usual cryptic manner on twitter. He quoted part a former speech he had made last year:

The arrests had come just days after Iran’s president denounced Internet censorship as “cowardly”. He said that “trying to win the battle for public influence by restricting the Internet was like bringing a wooden sword to a gunfight”. This speech further highlighted his stance against the rival conservative clerics, some close to Supreme Leader Ayatollah Ali Khamenei, who promote censorship as a necessary tool for the protection of the 1979 Islamic revolution. Reflecting a broader clash between Iran’s religious conservatives and the faction represented by Rouhani who was elected nearly a year ago partly on pledges to ease some of the political and social restraints in Iran, including censorship of the Internet. However, as mentioned before under the separation of powers in Iran, Rouhani has no control over the judiciary and the security apparatus, which are largely run by hardliners, who implement these restricting measures. The devisions are becoming clearer as we witness moves that are seemingly architected to intimidate moderates in Iran and sabotage Rouhani’s efforts. Especially in recent negotiations on Iran’s disputed uranium enrichment program, which has left the country basically ostracised by the West.

As Azadeh Moaveni notes, these moves are not just showing a rift between the two sides, but rather a struggle by hardliners to ensure that Rouhani does not secure a second term. There is economic gain for those opposing Rouhani who have prospered in Iran’s international isolation, and are thus working hard to maintain it. Moaveni rightly asks “The question is whether the hardliners are pursuing this radical agenda on anyone’s behalf.”

Although, our story has been dominated by the fiasco of the Happy video, it feels as though a move to arrest these young Iranians came at a timely period to cover larger more concerning impending events. The 22 May was the date scheduled for the execution of two members of the Ahwazi minority; however it has not been officially announce whether this has taken place. The two were forced to “confess” on TV, then held in an unknown location.

Ali Chebieshat and Sayed Khaled Mousawi were sentenced to death on 9 September 2013 by a Revolutionary Court in Ahvaz on the charge of “enmity against God” (moharebeh).  Amnesty International notes that “they were forced to “confess” on TV in relation to the explosion of a natural gas pipeline close to their native village” although the director of the state-owned Khuzestan Gas Company had already described the explosion as an accident.

Ali Chebieshat and Sayed Khaled Mousawi are cultural rights activists who have advocated for cultural and linguistic rights of Ahwazi Arabs. Historically, Ahwazis in Iran have been marginalised and discriminated against “in access to education, employment, adequate housing political participation and cultural rights”.

Again, the mockery of justice through forced confessions in Iran highlights disastrous state of the Iranian justice system. “The harrowing stories of Ali Chebieshat and Sayed Khaled Mousawi show how justice in Iran is seriously flawed. People are routinely forced to ‘confess’ to crimes they didn’t commit and face deeply unfair trials before being marched to the gallows,” said Hassiba Hadj-Sahraoui, Deputy Director for the Middle East and North Africa Programme at Amnesty International. “The Iranian authorities are violating every rule in the book, including failing to give defendants a fair trial, presume their innocence or even share with them the verdict sentencing them to death. These executions must be halted.”

Arrested in November 2012 without a warrant, they were held in solitary confinement for over seven months. According to Amnesty International, they are believed to have been tortured or otherwise ill-treated. Both men have denied all the charges brought against them, with no investigations into their allegations of torture or other ill-treatment.  For more detailed information please refer to Amnesty’s report.

Earlier this year, reports highlighted the intensified persecution of Iran’s highly impoverished Ahwazi Arab minority under the administration of President Rouhani. During his presidential campaign that Rouhani claimed that he would address the ethnic demands in order to win support from the non-Persian half of the Iranian population. The death sentences and the dismay of justice for Chebieshat and Mousawi have proven that this has not been achieved.  We urge the Iranian government to halt the execution of Ali Chebieshat and Sayed Khaled Mousawi and grant them a fair trial, in line with Iranian and international laws, in the hope that it is not already too late.

INSTAGRAM UPDATE (23/05/2014): Preliminary reports suggest the banning of Instagram in Iran. No official confirmation has been given as yet.