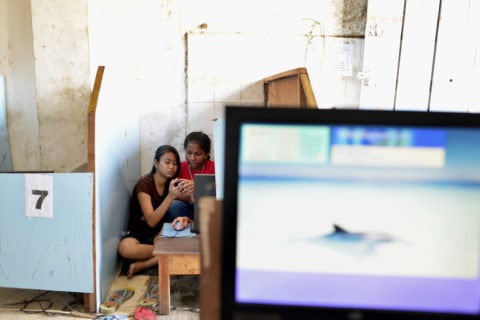 Two girls check their smartphones while sitting on a mat by a computer terminal in the only internet cafe in West Sumba, in Waikabubak, the provincial capital of West Sumba.

The constitutional amendments of 2000 incorporated the right to information into the Indonesian Constitution.[i] Article 28F guarantees every person the right to communicate and obtain information for the purpose of the development of his/her self and social environment. Everyone also has the right to seek, obtain, possess, store, process and convey information using all available channels.

Indonesia adopted the Public Information Disclosure Act (RTI Act) in 2008, and it came into force two years later on 1 May 2010.[ii] The process for the adoption of this law began in 2000 at the initiative of the Indonesian Center for Environmental Law (ICEL) and was supported by a multi-stakeholder coalition of approximately 40 civil society organisations and individuals.[iii] The Coalition developed a draft law in 2002, from which the draft legislation was developed by the Parliamentary Special Committee and sent to the then-President Megawati Sukarnoputri. Negotiations halted for several years until resuming in 2005.[iv] The Government Regulation on the Implementation of Freedom of Information Act[v] and the Central Information Commission Regulation on Public Information Service Standards[vi] were subsequently adopted to supplement and clarify the law.

Provisions of the RTI legislation

The purpose of the RTI Law is to materialise good state management, optimise public supervision on the organising of the state and matters in the public interest and to develop an informative society. When providing information, the relevant public agency must take into consideration the overarching principle of supplying the information fast, prompt, and at a low-cost. However, the law demands from requesters that they state a reason for their information request.

Only Indonesian citizens and/or Indonesian corporations have the right to request information; Indonesian residents and foreigners are not provided any rights in this regard. The RTI Act applies to executive, legislative, judicative agencies, state-owned corporations, non-governmental or other publicly funded organisations and organisations funded from overseas. The Act defines the concepts of “information” and “public information”. The latter means any information, produced or processed by a public agency in relation to organisation of the state and other information in the public interest.

The Act broadly stipulates that requests can be made to the relevant public agency in “writing or otherwise,” including by email. The requester needs to state his or her name, address and the subject of the request. Problematically, the requester also needs to give the reason for requesting public information. The RTI Act does not stipulate whether the agency is obliged to respect the requester’s preference for the format of the requested information.

Every public agency is required to appoint an Information Management and Documentation Officer; however, there are no clear instructions laid down for the officers to provide assistance to the requesters. In case the information is not in possession of the public authority that receives the request, such agency must notify the requester where the information can be obtained; there are, however, no provisions on transferring the request to the competent authority.

The agency has 10 working days to either provide the requested information or issue a refusal notice. This period may be extended for a maximum period of 7 working days, provided that the reason for delay must be provided to the applicant in writing.

Information Commission Regulation No. 1/2010 stipulates that the local authority determines the fee structure for obtaining copies of public information[vii] and the RTI Act states that the requesters have the right to complain in case of unreasonable fees.

The RTI Act adopts an unusual language of a “right” of public agencies to refuse access to public information. Nevertheless, agencies are required to interpret all exemptions restrictively and the information may not stay restricted permanently. Information that should be exempt from public access relate to law enforcement, intellectual property and fair competition practices, defence and security of the state, natural wealth, national economic security, diplomatic relations, personal secrets and similar. All exemptions except for the one relating to the “natural wealth” of Indonesia are subject to a harm test. Equally, there is a mandatory public interest override applicable to all exemptions; should revealing the information serve a “larger interest,” the otherwise protected information shall be released to the public.

The law provides for the possibility of partial access and “blackening” only restricted information, while enabling access to the rest of the requested document.

The body must provide the requester with a written notification on the reasons why the request may not be granted. The Act stipulates that the reasoning shall take into account “political, economic, social, cultural considerations and/or state defense and security.”

The RTI Act provides for internal and external appeal options. Internally, the appeal is with the supervisor of the information officer. External administrative appeal is possible with the Information Committee, an independent institution competent for overseeing the implementation of the RTI Act. It consists of the central, provincial and, if required, district/municipal Information Committees.  Members of the Central Information Committee are recruited openly and nominated by the President through the Ministry of Telecommunication and Informatics. The government sends the nominations to the parliament and the candidates are elected by the Indonesian parliament through a fit and proper test, and subsequently appointed by the President. The Committee is competent to inspect the documents and issue instructions and its decisions are final and binding. In effect, the Committee settles disputes and operates under the dispute resolution procedure. The requesters also have the right to file a suit in court if they are obstructed from obtaining public information.

Every public authority shall annually publish information on the number of requests received, approved and denied, the reasons for rejection and the time for fulfilling the requests. The reporting is complete through publishing the information. The Central Information Committee reports on implementation to the Parliament, whereas the district/municipal committees report to the district/municipal parliaments. The reports are public. There are no provisions on awareness-raising activities or conducting promotional measures.

Implementation of the RTI legislation

Since the RTI Act came into force, the implementation of the law has been slow; by August 2012, the Alliance of Independent Journalists estimated the implementation to be at 30 per cent.[viii] Many NGOs have since raised concerns regarding the RTI Act. One of the main concerns is that the law has broad exemptions in relation to national security and foreign relations, which could still lead to a significant amount of information being withheld.[ix] Despite the lack of clear provisions surrounding classified information, the sanctions for the violations of such remain high.[x]

One of the factors delaying implementation is the lack of understanding by public officials of their transparency obligations,[xi] who still decline to reveal information.[xii] There is also a disparity in how public bodies interpret the exemptions, leading to unconsolidated jurisprudence.[xiii] Often, local, provincial and national public agencies also lack the funds, procedures and personnel necessary to effectively implement the law.[xiv] While there have been some efforts to train relevant officials on information disclosure through the efforts of the CIC or NGOs, this still does not meet the needs.[xv]

Some Indonesians are apprehensive about requesting information from public agencies, fearing that the act will be perceived as challenging authority.[xvi] There remains a general perception, particularly among the media, that in order to speed up service applicants must pay out bribes to government officials.[xvii] The culture of secrecy is attested by research. In a 2012 test, out of a total of 224 requests submitted, less than half of the cases were granted information and severe flaws in handling the requests were noted.[xviii] Moreover, not all of Indonesia’s regions have yet set up Information Commissions to protect the right to information.[xix]

Some Indonesians are apprehensive about requesting information from public agencies, fearing that the act will be perceived as challenging authority.

Information is not sufficiently available proactively, largely due to inefficient information management systems and a lack of capacities and skills in public bodies.[xx] The government is slowly opening up[xxi] and in September 2014 it launched an open data portal.[xxii]

The Indonesian Press Law[xxiii] recognises the right of the press and the public to information. It stipulates that the domestic press has the right to seek, acquire, and disseminate ideas and information, and must fulfil the public’s right to know.

The State Intelligence Law (SIL) 2011[xxiv] greatly broadens the power of the State Intelligence Agency, Badan Intelijen Negara. The SIL’s vague phrasing of crimes has the potential to conflict with the terms under the RTI Act. The SIL prohibits individuals or legal entities from revealing or communicating state secrets, with penalties of up to 10 years in prison and fees exceeding 100 million rupiah. The SIL defines “intelligence secrets” as “information that could jeopardize national security,” but provides no further explanation about the definition of “national security.” The Constitutional Court rejected a challenge to the law in 2012.[xxv]

Indonesia does not have a comprehensive whistleblower protection law, although the Law on Witness and Victim Protection[xxvi] offers protection to whistleblowers who reveal information leading to criminal prosecution. The implementation of this protection in practice is reportedly severely flawed.[xxvii] In addition, the Anti-Corruption Law[xxviii] also establishes some protection for whistleblowers that are considered witnesses.

Indonesia has acceded to the ICCPR and signed and ratified the UNCAC.[xxxi]

The country was one of the founding countries of the Open Government Partnership (OGP) and launched the partnership in September 2011.[xxxii] Indonesia’s Action Plan addresses the lack of transparency in several sectors, from the government to business and investment. In 2014, Indonesia acted as a Lead Chair of the OGP.[xxxiii] Indonesia endorsed the ADB/OECD Anti-Corruption Initiative for Asia-Pacific and OECD Busan Partnership for Effective Development Co-operation. Indonesia also joined the Extractive Industries Transparency Initiative (EITI) and has been declared compliant in December 2014. Indonesia has also joined the International Aid Transparency Initiative (IATI) and has been a partner country since 2012.

Read the full report – Asia Disclosed: A Review of the Right to Information across Asia.

[i] Constitution of Indonesia, unofficial translation.

[xvi] ARTICLE 19 and PATTIRO conducted interviews, focus group discussions and RTI trainings in Lebak and Serang throughout 2012 for a project funded by Open Society Foundation.

[xxvi] Law 13/2006 regarding the Protection of Witnesses and Victims (English translation from p. 17 onwards).