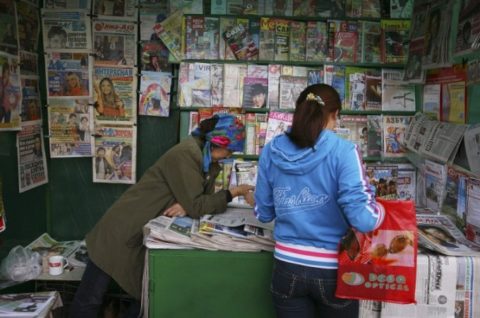 On World Press Freedom Day, Article 19 and its regional partners, Adil Soz, NANSMIT and Media Policy Institute call on the governments of Kazakhstan, Tajikistan and Kyrgyzstan to ensure respect for the right to freedom of expression and to ensure that journalists can carry out their professional activities in a free and safe environment.

While freedom of expression and the right to access information are enshrined in the constitutions of all three states, and in the International Covenant on Civil and Political Rights, to which they are all signatories, Kazakhstan, Kyrgyzstan and Tajikistan continue to disregard their obligations regarding protection of journalists and the ensuring a free media.

Restrictions on journalists on accessing information of public interest

Ensuring journalists have access to public information is essential for a free and diverse media, enabling journalists to present the full facts of a story and, where necessary, investigate corruption and wrongdoing, thereby enabling  people to have informed opinions and to engage in full and open debate.

In Kazakhstan, MPs are drafting a law on access to information, which they claim will establish the right to unimpeded access to information. However, according to independent experts, the draft law lacks two critical elements that would ensure it meets international FOE standards: firstly, it does not include a three part test, necessary to determine when and which information may be denied; and secondly, it contains an overly broad description of ‘confidential information’, which does not state clearly defined grounds for legitimate exemption and could be used to restrict access to various categories of information of public interest. On March 20 2015, a journalist with KazTag news agency, Madina Alimkhanova, and a journalist with Tengrinews news agency, Alisher Akhmetov, were investigating a fire in the National Art Academy, however were prevented from filming inside the building by its rector. A dean of one of the Academy departments tried to force journalists to leave the building and further incited students to attack the journalists.

Journalists also face problems in accessing court records and are often prevented from attending open court proceedings. For example, in April 2015 journalists were requested to leave open court proceedings during a trial concerning a fire at the Inom Market, in which the director of the market and his assistant faced charges of arson. According to the defendants’ lawyers, journalists’ presence at the proceedings were likely to influence the court’s objectiveness when considering the case.

There is an international consensus that criminal defamation is unnecessary for protection of reputation, and must be abolished in view of its chilling effect on free expression; however, in Kazakhstan, criminal defamation charges, which may entail prison sentences, as well as excessive civil defamation cases, continue to be brought against journalists.

In one such case, Aigul Musabayeva, chief editor of the newspaper Issykskiy Vestnik is facing defamation charges under Article 130 of the Criminal Code, punishable by up to 3 years of incarceration following the publication of an article, entitled “Death under a bridge”, covering the alleged suicide of a student at the Zhetesu Law College.  In a private complaint, Gulbarshyn Mukhamedzhanova, deputy director of the college, insisted that information presented in the article distorted the truth, and argued that the  article had falsely claimed that the college’s senior management had prohibited from giving information to the journalist, while refusal to do was at the request of law enforcement bodies.  In addition to numerous criminal defamation clauses, Kazakhstan introduced Article 274 of the Criminal Code on “Dissemination of knowingly false information” in 1 January 2015, which has already been applied twice, with the potential to censor free expression.

In Kyrgyzstan and Tajikistan, where defamation has largely been decriminalized, civil defamation cases are disproportionately applied, to stifle free media.

We are particularly concerned by a civil defamation case initiated on April 17 2015 by the Kyrgyz Prosecutor’s Office on behalf of the President Almazbek Atambayev against journalist Dayirbek Orunbekov, following the publication of an article entitled, ‘When will the Osh events, ignored by Otunbayeva and forgotten by Atambayev, be politically assessed?’ According to the Prosecutor’s office, Orunbekov accused Atambayev of ‘a particularly serious crime, involving the death of a large number of citizens in the south of the country in June 2010’. The Office of the Prosecutor General is currently seeking 1 million Som (approx. GBP 10,000) in compensation for damage inflicted on the honor and dignity of the President.  This court case may create a dangerous precedent for other state officials and would have a profound chilling effect on freedom of expression unless dismissed by court.

In Tajikistan, Umed-88, a private company, filed a lawsuit in April 20145 against the independent newspaper Payk and its journalist Sharifhonu Tagoymurod, following the publication of an article,  arguing that people in the city of Kuljab would prefer to have a bus station than a petrol station run by Umed-88 in the city of Kuljab. The company is seeking 50,000 and 10,000 Somoni (approx. 5500 and 1000 GBP), to be paid by the newspaper and the journalist respectively, as moral damage inflicted on the honor, dignity and business reputation of the company.

Kazakhstan, Kyrgyzstan and Tajikistan are failing to provide a free and safe climate for the activities of journalists and media outlets. Numerous legal provisions are used to restrict journalists’ activity, putting journalists and media houses at risk of long prison sentences, exorbitant lawsuits leading to bankruptcy and the closure of media outlets. In this environment, independent media struggles to survive and self-censorship flourishes.

On World Press Freedom Day, we call upon the governments of Kazakhstan, Tajikistan and Kyrgyzstan to ensure that journalists are supported by a legal framework that enables them to carry out their professional duties fully, and in safety. Journalists’ access to public information must be guaranteed through the adoption of specific laws on access to information, in line with international standards; and such laws, as well as existing legislation, must be fully implemented. Moreover, the states must use all measures available to them to allow journalists unimpeded access to cover stories of public interest; and ensure the independent, speedy and effective investigation into harassment and attacks on journalists, ensuring that perpetrators are brought to justice. We further call upon all three states to refrain from passing legislation that may censor journalists, and to overturn regressive legislation, including by decriminalizing defamation, where it remains a criminal offence, and capping the amount that may be sought in civil defamation lawsuits.