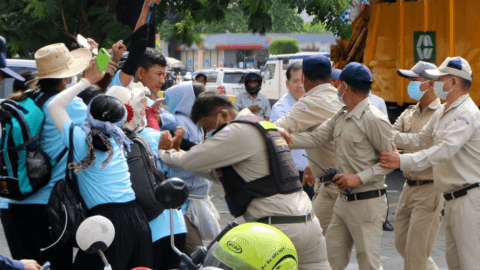 Photo by the Cambodian Center for Human Rights

ARTICLE 19 and the Cambodian Center for Human Rights issued this statement during the Interactive Dialogue with the Special Rapporteur on Cambodia at the 48th Session of the UN Human Rights Council.

ARTICLE 19 and the Cambodian Center for Human Rights welcome the Special Rapporteur to his new position and look forward to working with him to address ongoing human rights violations in Cambodia.

We once again address the Human Rights Council about Cambodia, with critical concerns that the crackdown on human rights shows no signs of relenting.

The Cambodian government has continued to build upon its legislative framework to instil fear and silence dissenters. In February 2021, despite concerns raised by multiple UN Special Rapporteurs and civil society organisations, the Sub-Decree on the Establishment of a National Internet Gateway came into force, setting in motion the creation of a government-controlled gateway through which all Internet communications and Internet data traffic circulating within and coming into Cambodia must pass. This could devastate the rights to privacy and freedom of expression online by enabling mass surveillance of online activity and enhancing censorship capacities. In addition, the Law on Measures to Prevent the Spread of COVID-19 and other Serious, Dangerous and Contagious Diseases, swiftly passed in March 2021, has been used to silence critics of the government’s handling of the pandemic. The government has also advanced a Draft Law on Public Order and Draft Law on Cybercrime, threatening to eliminate remaining space for dissent and protest.

The Cambodian authorities have continued to repress press freedom, routinely arresting and detaining journalists and revoking the licenses of independent news outlets. Respected journalists, including Sok Oudom and Ros Sokhet, were convicted under politically-motivated charges of “incitement” and remain in detention. The situation for human rights defenders, particularly for those standing up for environmental rights, remains critical. A total of five activists affiliated with environmental group Mother Nature have been convicted for their expressing their views on environmental issues, with three further members currently being held in pre-trial detention. In addition, various youth activists of youth group Khmer Thravak and the Khmer Student Intelligent League Association were targeted for exercising their right of peaceful assembly.

ARTICLE 19 and the Cambodian Center for Human Rights urge the Cambodian government to repeal or abandon all laws that restrict the right to freedom of expression, and to immediately and unconditionally release those who have been arbitrarily arrested or detained for expressing dissent or criticism.

We also encourage the Special Rapporteur to take a critical approach in his reporting and make specific and strong recommendations on the right to freedom of expression to the Government of Cambodia.

Given that the human rights crisis shows no signs of improving, we question whether Item 10 is a suitable avenue to discuss the situation in Cambodia.