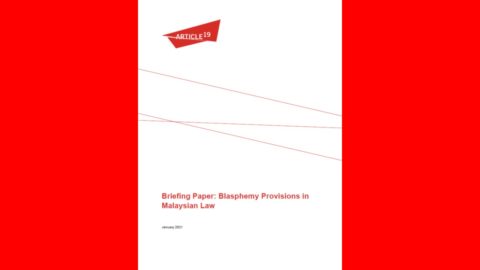 Malaysia is an ethnically and religiously diverse democracy, but in recent years its multicultural consensus has frayed in the face of increasingly strident religious conservatism. Moreover, successive governments have repeatedly used blasphemy provisions in Malaysia’s legal framework to target individuals who challenge majority religious views. These provisions are incompatible with international human rights standards. Their application to silence religious minorities and dissenters violates the rights to freedom of expression, freedom of religion or belief, and equality and non-discrimination.

In March 2019, the Department of Islamic Development Malaysia (Jakim) invited the public to lodge complaints about any media content, including content on social media platforms, that insults the Prophet Muhammad or Islam. Jakim established a new unit to monitor complaints and refer them to the Royal Malaysia Police (PDRM) and the Malaysian Communications and Multimedia Commission (MCMC) for further action. In its first week, the Jakim unit received over 10,000 complaints. MCMC Chairman Al-Ishsal Ishak promised that the complaint mechanism would be used to expedite ‘enforcement action’ against anyone who contravened a vaguely worded ban on criticizing Islam or causing ethnic disharmony.

In the year following the establishment of the Jakim unit, authorities arrested several people for allegedly blasphemous online posts. The Perikatan Nasional government, which came to power in March 2020, has continued these efforts. The Deputy Minister in the Prime Minister’s Department (Religious Affairs) Ahmad Marzuk Shaary recently warned that any posts that insult Islam or the Prophet Muhammad will be treated as serious offences, emphasizing that Islamic teaching must be protected since Malaysia is a Muslim-majority country.

Malaysia’s Penal Code and other laws contain several provisions that have been used to censor and punish expression relating to religion and to entrench a hierarchy of religious beliefs. These include:

International human rights bodies and experts have repeatedly warned that blasphemy provisions are inconsistent with international human rights law, including the right to freedom of expression and the right to freedom of religion or belief. Blasphemy provisions are arbitrary and open to abuse. They inappropriately empower government authorities to decide the parameters of religious discourse. Minority groups and individuals holding unpopular opinions are often disproportionately targeted. The enforcement of blasphemy provisions is highly problematic, especially when criminal sanctions are applied. As a result, blasphemy provisions promote intolerance by restricting the rights to freedoms of expression, thought, and religion. Such prejudice can result in devastating consequences for society.

This briefing paper sets out the international law and standards relating to blasphemy provisions. The paper analyses the above provisions against those standards and makes recommendations for legal reform. It suggests steps the Malaysia government could take to combat the root causes of discrimination and intolerance. Restricting discourse does not resolve religious and racial tensions. Censorship, including the restriction of online expression, instead fosters intolerance and fear. It is imperative that the government of Malaysia protects the right to freedom of expression and promotes positive policy measures to nurture dialogue and promote understanding between diverse communities.